Things to do when you can’t sleep

TONIGHTS FORAY INTO THE NO SLEEP ZONE

As a reminder of who taught the Tiny Terror all his bad habits, see above.  He waits until I’m in the middle of writing a post/email/book…and then, he strikes; a mini-lion on the prowl.  Not that any self-respecting lion would be caught eating cheese grits…

Did you know the Tiny Terror ate my mashed potatoes?  Yesterday, he tried to eat my cheese toast. The day before that, he ate my key lime pie (but he doesn’t like crust).

He’s quite sneaky.  He pushed OBCC with his feet until he moved over. That way, both of them could block the monitor while the Tiny Terror slept off his meal. 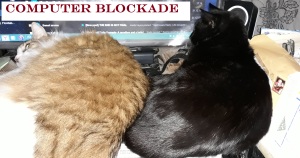 I looked up information about cats eating weird food.  It seems that cats will eat bread, pizza, olives and, yes, toast.

All I could do was pet the strange little critter and be grateful he left the crust for me.

I tried meditating and then just went for the Ibuprofen & allergy meds that make you sleepy.

How, you might ask, does that help me catch the zzzz’s?

It’s quite a jarring experience.

Half an allergy pill and one ibuprofen dissolve that trampoline.  It might take two hours, but it works.

I threw in the part about calling my daughter and taking a shower because it rhymed.  I do weird things like that when I’m half comatose.  I could call my sister — she’s 3 hours behind, so it’s only 9:30pm where she lives.

The offending cat is now using my stereo speakers to sharpen his claws.

This is going to be a long night.

16 thoughts on “Things to do when you can’t sleep”