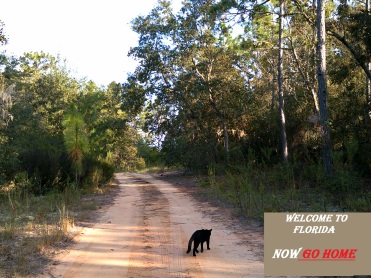 Don’t come to Florida in the summer, where 95F with 100% humidity is normal.

If you try to use your GPS in rural areas, you’re a numbskull and you don’t belong anywhere that isn’t the size of Jacksonville, St. Augustine, Orlando, Tampa, or Miami.

Apparently, I’m not the only one who has witnessed too many GPS fails.

There are usually two streets with the same name in my area of Florida. Apparently, the people naming them didn’t know that avenues are supposed to go one direction and streets the other.

If you ever had to wait for people in an extended cab pick-up truck — hauling a 30 foot travel trailer — trying to back out of this road, you’d understand.

Here’s the scenario:  I’m coming home from work.  All I want to do is, remove my #*$&@# bra, and get comfortable, but someone with a trailer costing more than I’ve made in a lifetime marches over to the only car on a dirt road — and asks, “Is this Lakeway Drive?”

When I say no, they look at their GPS and announce, “Why does it say I’m on Lakeway Drive?”

“Before you entered this dirt road, there was a sign at the corner,” I reply.   “It says Main Street.”

“Please remove your vehicle so that I can get to my home — the only one on the entire block — that’s 10 miles away from Lakeway Drive.”

Then you see it — that look of fascinated horror…the gasp!  And then the dumbest question of all time comes out, “You don’t have air conditioning in your car?”

No, I don’t have A/C in my home: There are these things called “trees.”  If you cut them down, you’ll swelter in the summer and freeze in the winter.  If you have lots of large windows with a wonderful view of the outside treeline — and window fans — it’s always 20 degrees cooler inside.

You can’t save the environment and use air conditioning, too.  It’s like telling people to use a bicycle instead of a car, and then doing this:

No, Florida isn’t for everyone.

I prefer a green Christmas far away from any city the size of Jacksonville, St. Augustine, Orlando, Tampa, or Miami.

The following is a map.  It shows where Interstate 10, 95 & 75 are located.  Buy this before going anyplace that is NOT on these roads,

and for God’s sake, turn off the GPS so this doesn’t happen to you.