Every year I hear about the coming apocalypse.

It’s not like we can’t bomb ourselves out of existence.

The last apocalypse happened over 12,000 years ago, during yet another ice age.  Our luck ran out when a meteor quite literally “hit the ice” and melted several million tons of it.

This is what Earth looked like shortly before a wall of water 400 feet high wiped out anyone who wasn’t living on a mountain. 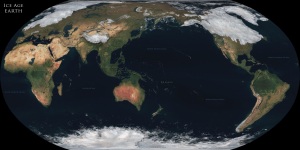 You might have noticed that Florida was a lot fatter back then, and it explains why many ruins have been discovered under water.

So then…how does one prepare when the Sh!t is about to hit the fan? 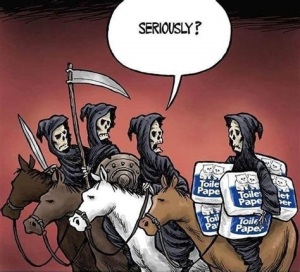 Personally, I’d rather have my provisions delivered by him:

It isn’t unreasonable to assume that the next apocalypse will be delivered via another celestial warning:

Yet again, we have the technology to detect a meteor, build the underground cities, and save humanity, but what are we spending our money on instead?

← …and I lived to tell about it
Can you spare $10 to give someone a reason to be thankful? →