We can’t help it.  There’s always that ONE dog in the pack, the one you have to say is your favorite.

For me, it’s the one in the middle of the picture. She’s part lurcher, the bottom of her mouth shorter than the top.  Like me, she’s not quite right.

…but she loves me with all that’s within her.

If she didn’t know she was my favorite before today, she does now.

I spend most of my time writing books or reports, and about half an hour each day doing yoga.  I rarely go for walks — the area around my home looks like this:

The day started out well, until I opened the front door.  Dogs went flying past the stairs after the the Tiny Terror.  As usual, he jumped on the top of the car.

Little did I know that 3 days of rain from hurricane Ian, with winds that rattled the fence had unlocked the gate!

I had already turned my back to the scene, until I heard barking in odd places (aka, down the road).  To my horror, the front gate was open!

“guards” at the front gate

I looked around to find out which dogs were missing.  My better half found Angel Dog’s mama coming back through the front gate.   He counted the dogs and told me who was missing.

No, I didn’t bravely say, “My angel dog will come back.”  I cried like a helpless baby.  He took the car around the block and couldn’t find her while I cried in front of my computer while trying to play spider solitaire.

He arrived back home, shrugged his shoulders sand said, “I couldn’t find her.”

I put on my worst clothes (you’ve seen where I was going to walk).  The Tiny Terror followed me, and  I wasn’t happy about it.  He was the reason my Angel Dog ran out the door in the first place — to chase him.  I followed the Tiny Terror through the woods and took him back home again.  Thankfully, he didn’t follow me around the block.

Hurricane Ian left ruts and small valleys on the downhill trek.  I tripped many times, called her name until I was hoarse, and started down another treacherous area 3 long blocks from my home.

I had been walking through rarely used roads for about an hour, calling her name with a throat so sore it felt swollen.  This time, I heard a whimper.  I stopped and called out, “Angel Dog” through my tears.  A streak flew past me in the woods, I called her again.

She stopped about 30 feet away where I could barely see her.  She started to come toward me and ran away…again.  I said, “You’re my little Angel Dog.”  She crawled toward me, afraid of…I don’t know what.  Simply afraid of being alone in the wilderness.  Afraid to the point where she couldn’t trust anything or anyone.

I sat there on the ground, calling to her…watching he run away from me, crawl back, run away and — finally — allow me to touch her.

“You’re my little Angel Dog,” I said softly.  Her eyes closed, she rolled on her back, and soaked it in as I petted her chest.

She jumped all around me, following me uphill for 3 long blocks.  I wasn’t sure where the house was from there, so I just kept walking.  Muscadine vines have grown on the roadway near the place I call home.  They look something like this: 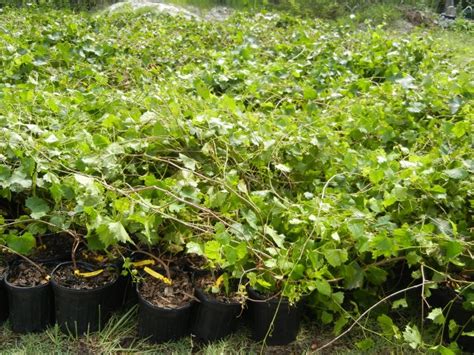 I slogged and tripped through the vines, Angel Dog behind me, her happiness evident when she realized she was close to home.

I must have looked a sight, huffing and puffing from the over-exertion, tears of joy falling from my eyes.  She ran inside and jumped into the kiddie pool that there for our dogs.

“I see you’ve found her,” my better half chuckled.

He smiled and replied, “You just proved it.”