Senseless Sunday Sarcasm : When a syndrome isn’t really a syndrome. 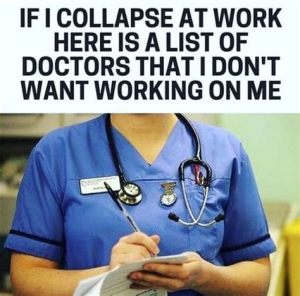 I had the audacity to read my medical history.  It’s on the insurance website and fairly easy to find, if you like playing chess.

There, I discovered that I have a non-existent disease I should have gotten in a hospital.

The name of this disease that is not a disease?  Euthyroid sick syndrome.

It says right on the website that it’s not really a syndrome, https://www.ncbi.nlm.nih.gov/books/NBK482219/

“…also known as nonthyroidal illness syndrome, refers to changes seen in patient thyroid function tests administered in the medical intensive care unit during episodes of critical illness. It is not a true syndrome.”

It’s true that I remember little about being in bed from November through mid-January.  It’s true that my brain resembled “irritated alphabet soup” more than anything else.  But why saddle me with a disease I can’t pronounce that doesn’t really exist?

When I wandered into urgent care, I was too sick to ask for a diagnosis, but it was on my insurance website:  Acute Upper Respiratory Infection.

That’s sort of like saying, “It’s in the blue bucket.”

Take a blue bucket, throw in some cow manure, chocolate cake, and leftovers from an overcooked dinner, and voilà; you have It’s-in-the-blue-bucket syndrome.

I certainly felt like mother nature had cut me a new one, but NEWSFLASH:  I wasn’t in the hospital, and I didn’t have major surgery.

I’ll translate the following and save you the trouble of reading it: We don’t know what it is, but if your doctor sends it to us, we’ll add it to the bucket list of syndromes everyone in the past two decades has diagnosed.

If you want to bother reading this, have at it.  I just told you what it means in the previous sentence.  I have none of the diseases listed below…or, I’m not aware if I do have them:

Hey!  I warned you it was dry, boring and useless but you read it anyway.

I can’t have something interesting like heart failure, cancer, or a foot fungus.  Nooooo.  I have to be stuck with Euthyroid sick syndrome which, in non-medical terms, is like saying, “We can’t find the blue bucket, but we know someone threw it in there somewhere.”

← From this point on
Senseless Someday Sarcasm : (Mental) Status →

21 thoughts on “Senseless Sunday Sarcasm : When a syndrome isn’t really a syndrome.”