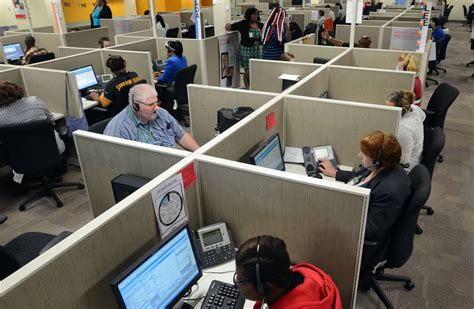 Pix from wsj.com (Wall Street Journal) “Call Centers May Know a Surprising Amount About You.”

Once upon a time, there were these things we knew as “call centers.”

I worked in one…for 4 days…between Thanksgiving and Christmas.

So many fluorescent lights! The constant rumble of noise! A clock in front of my eyes with a big red line saying, “You’ve been on the phone too long, dummy,” and whadda ya got?

I had a rotary phone on a hook, an ancient computer, and a keyboard.  When there were no calls, I was typing into the computer hundreds of addressed that had been mailed into the company.

Calls came in waves, and we knew when we had to be on alert — whenever the ads were on TV,  200 phones started ringing all at once!

Older people wanted to be nice and talk about the weather which — when you’re inside a huge warehouse cubbyhole — is the last thing you care about.

The day I walked into the managers office and said, “I can’t do this any longer,” I was afraid I’d be fired. Not a good look on any resume.  He smiled — and thanked me for my service.  He said my check would be in the mail, and a week later it arrived just in time the buy the kids their Christmas presents.

Yesterday I forgot my password and I was locked out of my account, so I called tech support for a local bank.  Waiting for 10 minutes is ominous while a mechanical voice says “please continue to hold” every 10 seconds, then…

…when I answered the phone, a rooster crowed in the background.

A woman with a VERY strong accent answered the phone and asked for my card number.

My first thought?  “What the hell does she think I am…daft?”

Who answers the phone…with an almost unintelligible accent…on a chicken farm…asks for your bank card number, name and date of birth…and expects you to give it to her?

When a man came into her office (if one existed), she immediately disconnected.

Who did I get?  The same person.  This time, the man in her office was whistling.  Ambient sounds faded away when she said, “Thank you for your information.  You can now used the password I provided…”

After paying the bill on-line, changing my password and closing the system down, I thought about a woman trying so hard to do a good job.

I wanted to hit the b@$!ard trying to get her fired…

…and the rooster?  He’d make a fine stew.

← Over looking, or looking over?
Awake →

One thought on “The new “call center””