Is there a National Dreadful Day?

If there is, September 21 is a good candidate.

I feel a lot like a cat dressed as a pizza slice. 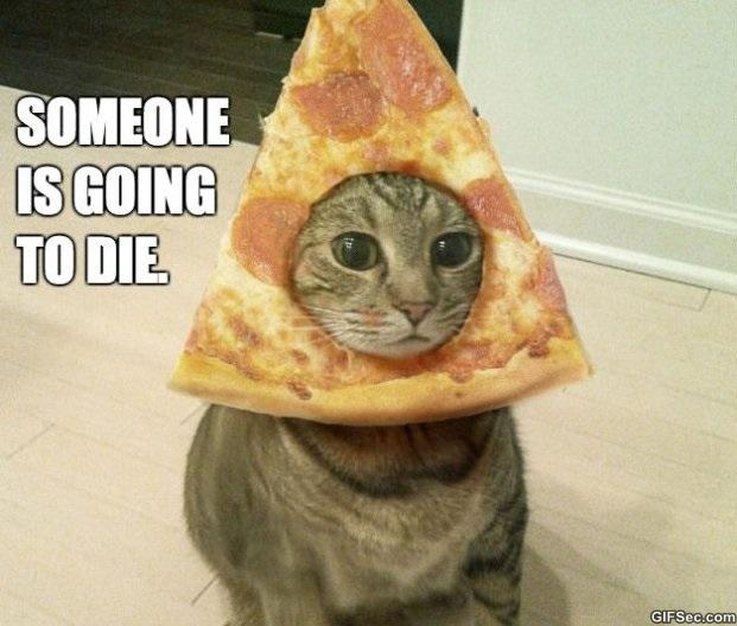 I can relate to this cat’s indignation.

I logged into the computer I use where I work, started to retrieve files from the server it’s linked to, and the connection to the server dropped.

For my second attempt, I was met with red X ‘s.

Yes, the moment I needed to use it, the server went down.

Today, my paycheck was given to me, and I did what I usually do, I scanned the back and front, then went to the bank site to make a deposit.

Where was the deposit@home link?

Apparently I’m not the only one wondering what kind of back@$$ward H3ll had just happened.  When I went into “CHAT” the robo-guard — virtually standing between me and a live person with a brain — had a ready-made answer.

If you’re read my posts, you are well aware that THIS is the level at which my computer skills function:

You also know that THIS is the level at which my cellphone skills function:

It only took me an hour to figure out what I was supposed to do.
.
First, I had to get the app.  That took 20 minutes.  The only reason the phone wasn’t thrown against the wall out of frustration was that my amazing daughter bought it for me as a birthday present.
.
Then, I had to go to the bank’s site on the computer to watch the tutorial that was mostly unhelpful.
.
Finally, I had the app and was ready to go. But signing in on a smart(@$$) phone is not as easy as doing it on a computer.
.
My eye hand coordination looks something like this:

.
I tried to sign in twice.  The third time I had to watch carefully to see if I’d poked the letters and number in the right place.
.
Now all I had to do was to take a picture of the check front and back.
.
I tried it on a desk “Error, cannot read numbers.  Not enough light.”  I tried it at the window.  “Error, cannot read numbers.”  After 4 tries in 4 different parts of my office, I was ready to give up.
.
I signed out, and then signed in on the computer.  The 3rd time I watched their lame “tutorial” I finally understood what I was doing wrong.
.
I had to be looking at the phone screen and point the back of the phone at the check.
.
I can’t imagine the horrid pictures I was taking of my face as I yelled, “D@#$%d #*$&%^@% cellphone!” every time I receive the “not enough light” or “cannot read numbers” message.
.
It was such a shame it couldn’t read my face.  I’m sure that, at some point, the veins popping out all over my face resembled numbers.
.
Anyway, I finally got it deposited.
.
But noooo….that wasn’t the end of this miserable excuse for a day.
A mere 20 minutes before it was time to leave my office, the computer decided to go really, really sloooooooooooooooow.  There were two things I had to save.  That took 10 minutes.
Then I pulled the plug.
.
Oh well,  I just have to remember one fact:  Tomorrow is another daze.
.
My apologies to Scarlett O’Hara.

19 thoughts on “Is there a National Dreadful Day?”