Life is more like a toilet. You could be one of the high-end models and spend your entire life in a showroom.

Or you could be a plain and simple toilet installed into a home containing 12 children, and all have Irritable Bowel Syndrome.

I have to admit, being endowed with the gift of overthink is a lot like a child flushing batteries down the toilet.  There is considerable backup.

If you’ve never had that happen, you don’t have children.  It requires a plumber.  I could’ve bought 1000 batteries for what was on that bill, and I still had to clean up the mess he left behind.

I used to work near the Marina in San Francisco.  You’d have to wear a cap or use an umbrella when you meandered along Fisherman’s Wharf.  Seagulls like to use human heads as toilets; they fly past and take aim.

…watching tourists flock to the stores that said “Going out for business sale.”

If you read “of” instead of “for,” you’ll understand why those places were always crowded.

Some places still had urinals for women — an oddity rarely seen today. 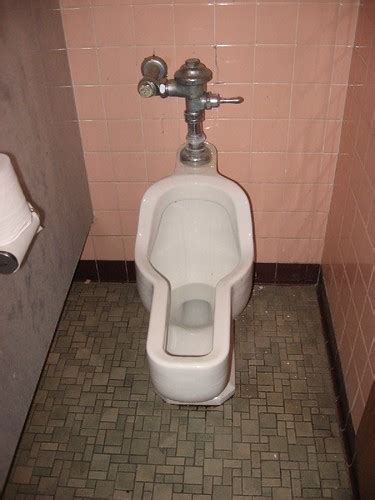 When you’re 5 years old, it makes a great kiddie toilet, but when you’re 50 and wearing a dress, it can be rather messy.

For men who don’t understand why:

If a woman didn’t have the knee power to squat low enough while holding up her dress, and keeping her nylons out of the way, she’d be wearing half of what came out.

It was even harder wearing pants.

There are no pictures available from 1950 to show you.  Back then, it would’ve been considered pornography.  Now, there are plenty of pictures showing women happily posing on the newest model squat toilet.

But, as usual, I digress.

What kind of toilet would I like to have?

One that comes with a maid.