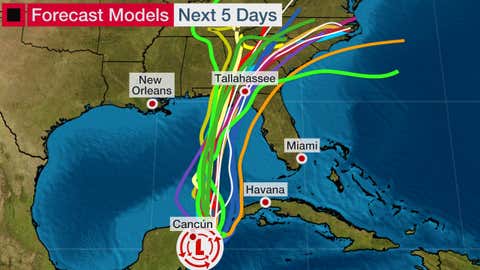 Why most people don’t just up-and-leave the state when someone says, “There’s a hurricane coming toward Florida.”

Florida transplants:  “We dodged that bullet!”

ANYONE LIVING IN RURAL NORTH FLORIDA: “Hurricanes change their mind more than a hyperactive kid in a 50 flavors ice cream shop.  Wait for it.”

Florida transplants:  “I knew it!  We’re doomed! Why did we listen to the people born in Florida?”

ANYONE LIVING IN RURAL NORTH FLORIDA: “If you live in South Florida and your house isn’t a foot off the ground, you’re an idiot. Ditto if you rented a first floor apartment.”

NEWSMAKER: Brace yourself for high winds, South Florida!  No, the winds aren’t that bad, but the flooding!

NEWSMAKER:   No, it’s stalled in the Gulf of Mexico and headed for Pensacola.  What?  It changed trajectory…again…and now it’s a Hurricane????  It’s headed for…we don’t really know yet.

Florida transplants:  What the hell do Rednecks know?

ANYONE LIVING IN RURAL NORTH FLORIDA:  We know how to close all our storm shutters within 10 minutes, we don’t mind 2 weeks of cookouts while we wait for the electric to come on, and many of us prefer to live without air conditioning.

NEWSMAKER:  Now it’s moving toward Orlando. Oh no!  A million people will be without air conditioning!  The horror of it all…no, it’s going further north. We don’t care what the hell happens to *shudder* those people anyway.

ANYONE LIVING IN RURAL NORTH FLORIDA: Given this is 2020, it will probably be over Gainesville, Florida by Friday the 13th.  Did you know that fewer hurricanes go through Gainesville than anyplace else in the state?

Florida transplants:  “WHAT!  My cousin lives there!

ANYONE BORN IN FLORIDA:  Not surprised, but don’t worry; by the time it gets there it will be nothing more than a rainstorm with higher winds than usual.

HOT OFF THE FLORIDABORNE PRESS:  This is a picture taken at 11:00 am on Thursday, November 12 — as Tropical Storm Eta passes by my house.

Did I mention North Carolina has flash flooding from the tropical storm rainbands?