It was 1972 and I lived 20 miles outside a college town. There were miles of tall forest — until a cluster of homes appeared out of nowhere.

My house looked a lot like this, but not as nice: 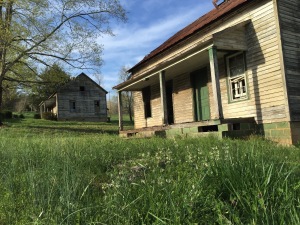 We had one phone, owned by Ma Bell (Bell Telephone) until it was deemed a monopoly that was too big to exist and became ATT, etc.   We had a party line, with a rotary phone, which was all I could afford:  It meant that 2 homes shared one phone line.

Long distance calls were very expensive.  I called my sister once, when she moved to Tulsa, and the bill for a 20 minute call was around $17.00.  As a comparison, gasoline was 28 cents a gallon, which is about 7 times what it costs today.  If that visual doesn’t do it for you, I was paid $90 a week as a secretary working for the school of public health at a local university.

Memories of that time are snippets of scents, emotions and mental snapshots.  But I remember quite well the occasional irritated, muffled sigh, followed by a *click* after I said, “You can hang up now, it’s for me.”

Most of the time, the interloper would stay on the line and listen to our conversation.  I’d preface the call with, “My nosey neighbor is listening in, so don’t say anything you don’t want to tell the entire town.”

My sister and I were tired of having to guard our conversation, so we used curse words and talked about sex, detailing all the different ways to have it that I’m sure Mrs. Nosey didn’t know existed.

I know it was a “she” from the gasp of horror just before she slammed down her phone.

I remember the house to the right of ours, rented by a doctoral student and his wife.  To the left of us lived an older couple who had raised their children in a house that felt empty of love.

From the time I entered my car to the time I arrived at work, I didn’t fear what might happen.  Most guys knew how to change a tire or do simple car repairs.  I rarely had to hitch a ride.

This was before AIDS, when people believed that all venereal diseases could be treated with penicillin.

Today, I have my AAA card and a Galaxy phone with me at all times.  If my car broke down, I’d call my better half so that someone would know I was stuck, and then I’d call the American Automobile Association’s emergency number.

Now, people are afraid of everything.

Karl, Karen and her friends Kyle and Kayla are in fear of the dreadful wallpaper.

I’d like to find the middle ground between THEN and NOW.