I was listening to a talk radio show that I enjoy with my friends from Alpha Centauri.  Usually, it’s about bigfoot, UFO sightings, why you should take vitamins, and why there won’t be alien disclosure until the space ships land in front of every government official on Earth.

We find those programs funny.

My friends from Alpha Centauri think every government in this world is run by 3-year-olds who never got over it when mom refused to let them have that triple chocolate ice cream cone at Baskin Robbins.

Put another way:  They prefer talking with people who have common sense and work for a living.

But today, there was a man on that talk radio station who swears our consciousness tells us the future far in advance.

It sounds so compelling:  He wants us to buy his book so that we can get rich.

I get more out of the vitamins I buy.

But he did say something that struck a perfect C major chord:  There are clues along the road of life telling you what you’re going to be doing in the future.

40 years ago, I took a “find your occupation” quiz.

Three published books later, and 18 more awaiting editing, it is painfully obvious that I am a writer and will be a writer until someone pries this keyboard out of my cold, dead hands.

One phrase keeps coming back to me, “If you want to be a writer, write.”

It’s so simple and to the point, it might have been something I wrote, but it’s more likely someone else came up with it.

So… as usual, I consulted my favorite search engine, http://www.duckduckgo.com.   In my 10 minute search, these topics were the first to show up:

When looking for the quote, I found one might become one of my favorites:

“A professional writer is an amateur who didn’t quit.”     — Richard Bach

But I think this is more along the lines of reality for the majority: 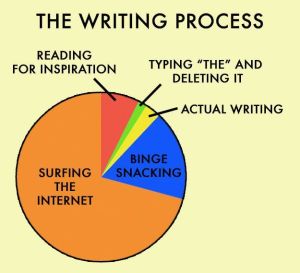 One quote came close, but somehow I doubt that people spoke like this in 135 A.D.

Another quote spells it out in greater detail. 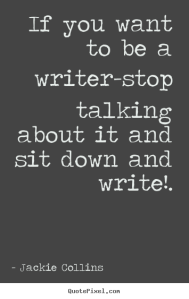 But I have to say this one expresses quite well what a writer experiences: 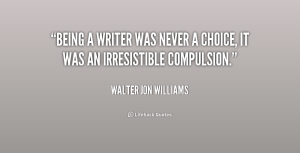 When people ask why I write, I say, “I can’t NOT write.”  It’s meant as sarcasm, since it’s a double negative sentence expressing one of the finest joys in life.

But it’s true:  If you’re a writer, the compulsion to give your words life can’t be contained. 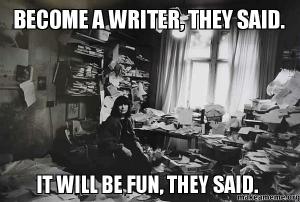