Senseless Sunday Sarcasm : 3 is too many

Having a brain that’s 20% female and 80% sarcasm, I have to wonder if this is the start of WW III, where one bomb takes out an entire city, and some people think it’s going to be awesome.

I’ll be fine, as long the wind is blowing north of Jacksonville, Florida at the time.

For people too far removed from the 1st and 2nd ones, I’m referring to World War Three.

If you live in the Amazon, Siberia, Northern Canada, and New Zealand, you probably won’t notice much of a difference.

Is that why so many famous people are moving to New Zealand?

No, I’m not insane (yet).  I skimmed an article that said the number of Americans who applied for citizenship rose by 70 % in the past few years.

Look at how much money these Americans can pour into the NZ military!

Without a doubt there will have to be a draft worldwide.

There’s a reason women haven’t been drafted.  Even in nature the males are expendible.  Until sex change is perfected, babies have to be produced by females.

If the goal is to reduce the population to zero, there’s no problem.  Go, fight, get drafted.  What do you think is going to happen when there’s 1 woman remaining at home and there are 10 men on the same continent with them who are not fit to fight? 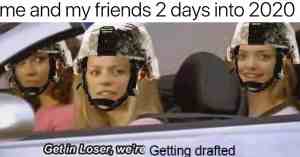 Don’t laugh too hard; flat feet disqualified people from serving in WWII.  So did fatherhood, and the age of 34 was considered too old.

I can hear you asking now, “Who cares?” 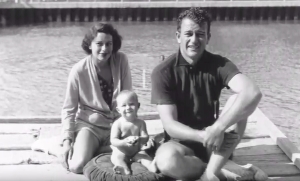 During WWII, pictures of women were painted on their planes.  Nowadays, what the women were wearing in the paintings would’ve been considered acceptable wear in Walmart. 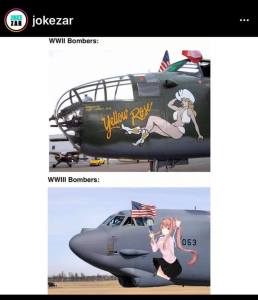 The paintings today look more like anime.  It just doesn’t seem right to have anime on the side of a plane.

What kind of picture will be painted on the side of a suborbital bomber during WWIII?

I can just see it now.

Delivering a 60 megaton hydrogen bomb that takes out half a country, the painting of a drag queen in a bikini — complete with chest hair — waves at the sky.

And then there are the people who understand one truth:  Crazies who would drop 50 hydrogen bombs are as likely to hit New Zealand as they would be to attack New York City.

What will be the most popular flying machine when WW III is about to explode?

Whatever gets you off-world as quickly as possible.

5 thoughts on “Senseless Sunday Sarcasm : 3 is too many”