Drowning in a sea of words. Need…advice…

I’m trying to draft a letter to an agent, but there is SO much I want to say.

Do I start by admitting that I’m a serial writer and if writing were a person, I’d be stalking it?

Or that I almost froze to death in Quebec June 2013 when I found an editor who would read my book to me?

BTW:  She was a terrific editor who later had to get a day job.

I spent two weeks at her home to edit ATTO RUN:  The First Level of Hell.   I used my credit card to pay Create Space for the cover, and a friend formatted the interior and uploaded it onto Create Space.

In other words, I was very, very lucky.

Perhaps I should admit that I’ll be 70 in July and want to have my books published before I die?

No…I’m not THAT desperate.  Yet.  I feel 20 on the inside, why would I want the world to know…oops.

Should I mention that my books are about people caught in a web of their own vices and forced to learn the hard way that the road to hell is paved with good intentions?

Do you know how cliché’s start?  They’re the evaporated milk of truth, repeated often because some of us won’t get the message any other way.

I can’t start a letter by saying, “I was at ____ writing conference and met you there.”   I have Tourette Syndrome, and it gets worse under stress.  It goes over really well when you’re standing in front of someone while you beep, click, blink/blink/blink, shrug, sniff, sniff, and try to stutter out, “I’m looking for a literary agent.”

Nope.  Not gonna go there.

How about the fact that I didn’t know the word “blog” existed until I checked out an agent’s website?  He said that he wouldn’t look at anyone’s writing unless s/he had a platform of over 400.

What was my first thought?  “Why would I need 400 platform shoes?”

Remember, I was in my 20’s during the 70’s, and platform shoes were 4 inches high at the toes.  When you tripped over your giant bell bottom jeans, you broke an ankle. 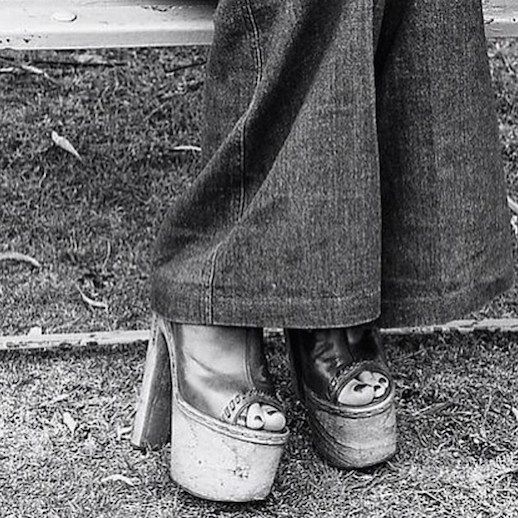 Not knowing what the hell a blog had to do with platform shoes, I asked my best friend, and sometimes editor, “What’s a platform?”

She explained it was a 21st century thing and helped me start this blog.

At last count, I had over 7100 readers, and nearly 2,800 were on WordPress.  I’m not sure if that many saintly people willing to read my swill would be enough for an agent, or if agents care about that stuff any longer.

Should I mention that my series spans a time period of almost 500 years, and I had to create a family tree explaining who was related to whom for eight generations as a reference for my editors?

In my defense, it prevents all of us from becoming confused.

And the genre!  Well, it is SciFi; but this SciFi contains love stories, humor, sarcasm…and possibly fantasy.

FIRST BOOK: The main character is Alma, a 56 year old woman who doesn’t know that her new love interest is a 70-something humanoid bird-insect that lays eggs in a host and looks like a man (Todlen Eicneo aka Tod Ryatto).  Alma’s son, works for the IRS.  He turned his father in for fraud so that he could get an office with a window. Alma becomes a widow, loses her home, and becomes a slave to her son.  She stays in that hell to care for her two grandchildren, Annie and Jonathan.  We meet Alma when she’s wondering, “Is there not one man in the universe who isn’t scum?”

SECOND BOOK: The main character is Annie, Alma’s granddaughter, who is now 18 years old.  She wants to go to college but she’s agreed to be the CEO for a company started in her grandmother’s name by a 4-armed alien that reads minds.  Remember the bird-insect?  She’s married to Alma, and the hottest movie star on Earth. Alma and Tod are about to have 4 designer quadruplets created by…yes…the 4-armed alien.  Trying to keep Tod Ryatto’s past a secret is a full-time job.  Who wouldn’t want to know that the man’s-man of movies is really a female from another planet capable of death by procreation?

THIRD BOOK:  Annie is finally going to college while running a multi-trillion dollar business.   It requires a security team, a university with a vested interest in keeping her identity a secret, and…yes…a lovesick 4-armed alien.

Do you see my problem?

Do you have any suggestions?

Or should I just stick to Indie publishing and call it a life?

14 thoughts on “Drowning in a sea of words. Need…advice…”