Most of this was originally published for The Nudge-Wink Report.  But, alas, that blog no longer exists since the founder passed away in February 2019.

I wished she were still around and Daylight Slaving Time had passed away.

In 1918, some idiot came up with the idea that if you jump started your clock an hour you’d have more light.

That was the same year the Swine Flu ran rampant over the Earth.  I have to wonder if it foobarred people’s brain cells.

We fall back…retreat with our tails tucked between our legs — like the slaves we are — and turn the clocks back an hour.

On MARCH 8, we spring forward.

We do it every year, and every year I say the same D@#n%d thing.

Why don’t we just

move the clock up a half hour in March

and stop F&$#ing with time!

There are those who shamelessly try to make it seem like fun, having your inner time clock pretzeled year after year.

Others find opportunity in doing a time jump

I happen to agree with this lady

My cat has another way of putting it

I would say this

But whoever invented daylight slaving time would be well over 120 years old and I think nature has already done that for me.

There is at one place in the USA where enough legislators possessed more than the common sense of a turnip. 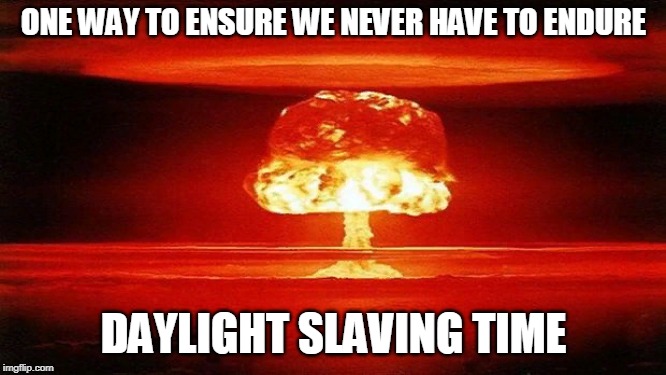 I prefer the less explosive approach to solving this ridiculous problem.

Politicians don’t seem to get it unless we use the in-your-space approach.

Maybe this guy would listen to reason.

Anyone who can vanquish ice giants can get rid of anything.

10 thoughts on “Senseless Reblog of a Reblog : Daylight Slaving Time”