If my cat begged for what he wanted most in life…. 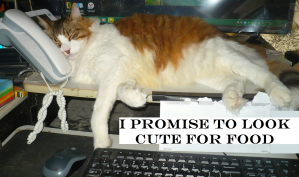 …obviously, he has no use for money.

It’s donor hunting season for politicians, and they’re as desperate for dollars as they are devious.

Some of the attempts to weasel a donation out of me include:

I learned the hard way that the MINUTE you “UNSUBSCRIBE” to an email that you never subscribed to, you’ve just become the number one target in a bizarre game of

The emails come from NOWHERE….literally.  I mean, really, I live in Florida — so why should I be getting an email to fund a political race in South Dakota?

Like the guy who tries to get the light bulb to go on by flipping the switch 3 times, at first I tried unsubscribing AGAIN.

The next 500 emails came from every politician running for every office in every state.

Two years ago, I made the mistake of giving a monthly $3.00 donation.  After the election, I tried to cancel it.  Remember the scene from The Hitchhiker’s Guide To The Galaxy where our clueless hero is told that the plans were on display behind a locked door?

I could find NO WHERE that told me how to STOP the donation.

I have a SPAM button and I know how to use it!