My desk is a mess; one guess why:

Fortunately, my speakers are at the edge of my desk and fell into a box containing a comforter to cushion their fall (I’m not as dumb as I look).  In this picture, he’s spent so much time pushing stuff off, and waiting for me to check the laundry so that he could push it off again that he’s worn out.

And…yes…he chose my chair as the perfect place to snooze for an hour.

When the temperature shot past 70F today, he shot past the dogs, and out the door.  He won’t be back unless it goes under 60F.

I have two words for the cat I raised from 6 weeks old…a cat who cradled next to me until he became a teenager:  Thankless bastard!

One day, I’m his bestest buddy and he’s sleeping on my arm.  The next, I don’t see him for three days, he saunters in for food and doesn’t want to be petted.

Does anyone else have a Thankless Bastard cat?  I wouldn’t recommend that breed if you have a soul.

I wondered if anyone else out there was owned by one.

I think I’ve found his mother: 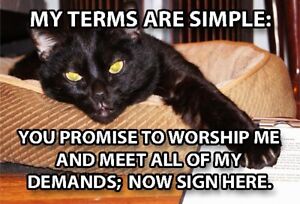 When he arrives home from doing whatever the Thankless Bastard breed does for fun at night, he announces his presence:

He’ll stomp on the keyboard if he wants a treat.  When I’ve had it up to my eyeballs with his antics, I’ll say “SHOO!!!”

Then, he reminds me of the truth about our relationship.

I’d sell him, but I’m too well trained as a cat slave.

← Santa Reimagined
Add title here cause I sure as hell can’t think of one at 3 in the morning. →