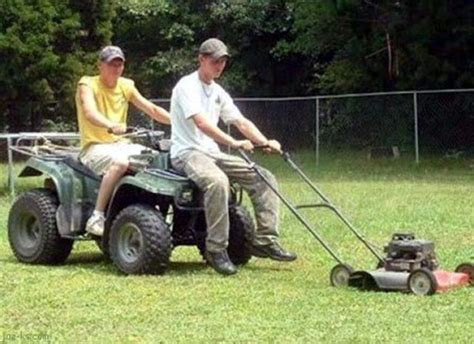 I have this neighbor…

Dick has three children and an ATV.  A few weeks ago, Dick was told that running his 4-wheeled mini-monster on county-owned dirt roads was against ordinance.

Then, Dick and his wife Dickette “misplaced” (aka lost) a toddler.  Cars, with and without insignias, descended on the place, and the distraught mother was reunited with a child that had disappeared down a dirt road.

In fact, it was THIS dirt road, a few years before it was eaten away by ATV’s:

The two trees growing out of the road were as far as I allowed my family to go.

I’ve been down that dirt road.  I do yoga and even I have trouble walking that trail.

Two days ago, we watched Dick, on an ATV the size of the one pictured at the top of this psst (sans lawnmower), with all 3 kids piled next to, or on him.  On a dirt road with the consistency of a cheese grater.

Can we scream “CHILD ENDANGERMENT!

Certainly I’m well aware there are 8 million people in the world and losing 4 of them isn’t going to make a dent in the population. If the adults want to have the discernment of a rabid gerbil, that’s their problem, but do they have to take the kid along with them?

Dick — you know the type.  Tell him, “You were told ATV’s are illegal on these roads and you almost lost one already.  Do you want to be the one responsible for an accident on an ATV with three kids and then rot in jail?” And He’ll rev the engine before doing wheelies in the front yard.

Yes, I know that my parents drove pickups with children in back.  Yes, I used to play on a swing set that was twelve feet high. But the swing set wasn’t attached to an ATV rolling down the road with a child that had been lost two days before.

Maybe I’m wrong for caring about children that could, at any time, fall under the wheels of a Dick who will try to blame his neighbors for the event.