Another year, another hurricane.

We have gone past the “Cone of uncertainty” and now have a new category:

The cone of RIDICULOUS 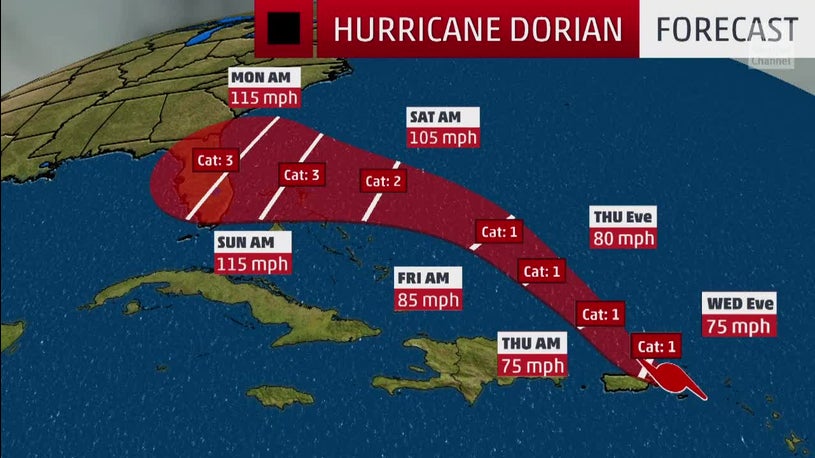 As you can tell, a cone the size of Alaska engulfs the entire state of Florida and part of Georgia.  No one knows exactly what Dorian is going to do once he gets here, either.

It looks like he’ll be visiting his friends from NYC who retired in West Palm Beach.

He hasn’t decided if he’s going to visit Tampa or cut through the middle of Florida, where he can visit Dizzy world and take in the country scenery in my part of the woods before heading back to city life in Jacksonville.

Here’s the problem that we, in North Florida, are facing.  Dorian might decide he wants to cut through Florida and mix things up in the Gulf of Mexico first, then wash over the armpit of Florida before getting to Jacksonville.  That’s the difference between a ho-hum tropical storm and, “OMG it’s a Cat 1!”

A category 4 won’t obliterate Miami, or West Palm Beach, but I’d bet my antique Jeep that many people will decide to move back where they came from up north — if they survive.   Northerners tend to die of heat stroke when the A/C isn’t working.

We were going to do our usual shopping at Dollar General on Saturday and play our favorite game.  It’s called “Let’s see how close to $25 we can get.”

Yes, we have $5 off $25 coupons that are burning holes in our pocket.

The two ailses that seem to get cleared out are the ones containing soup, canned chili, tuna, potato chips, and bread.  That way, you can get constipated during the week-long ordeal of being without electricity and won’t have to flush the toilet as much.

Well…back to work.  These implementation plans aren’t going to write themselves.

5 thoughts on “Another year, another hurricane.”