So….I’m sitting at home after taking 2 pain killers, 2 naps, and a couple of allergy pills.

Have you noticed that when you’re sick your mind throws the strangest thought at you? 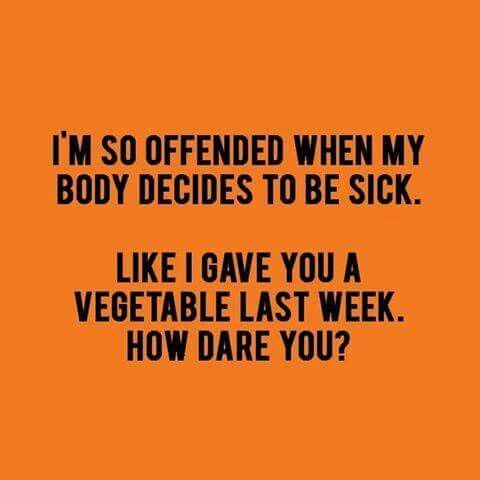 This morning, my body and I had a very serious conversation about the whole 2-hours sleep I’d “enjoyed” from 5 in the morning until the alarm blared out at 7:00 am.

Body: You’re going to regret this.

And so, at around 9:00am, a half hour before my first meeting, Body‘s gift for the day, laryngitis, hit with a vengeance.  He brought along his friend Dizzy, who used my eardrums as a trampoline, and invited Headache along for the ride.

Headache proved to be a Pain-in-the-brain, and I was finally forced to call in the Ibuprofen SWAT team for back up.

After my last nap, Body had a few harsh words to say.

Body:  Next time, listen to me when I tell you not to go into work.

Big sis and our nasty mutt.  Body didn’t like me then, either.  Maybe it was the bow?

Me:     You’re presently waging it in my brain?

Me:     Pullleeeze!!!!  No one in their right mind wants an atomic bomb ruining their barbecue.

Body:   Prez Kennedy was surrounded by people pushing for a war.  Instead of doing what he was told, he made a phone call to Khrushchev and asked, “Do you really want to kill off half the world?” and Khrushchev said, “You’re the one who’s hosting this party.”  So Kennedy said, “I told everyone I’d rather talk about the Cuba thing over dinner but they said you were a raving lunatic who wouldn’t listen to reason.”

Me:  Kennedy was a womanizer who used Marilyn Monroe as his personal sex toy!

Body:   And you don’t think that every president since the beginning of this country had flaws?

Me:     Why don’t you take a Cuban cigar and shove it up your….  Oh.  That’s already been done in the oval office.

Body:  Can I finish this story, or are you going to continue being a pain in my ass?

Me (sigh):  I can’t talk, can’t breath, and I’m craving Muenster cheese.  I have nothing better to do.

Body:  Listen to the story or be a pain?

Body:  So Khrushchev starts to laugh and says, “Everyone here thinks you’re a psychopath sitting on your throne while you laugh as the world burns. Obviously, you are not, or the fireworks for this party would have started already. Want to have some fun with the war mongers?”  So Kennedy says, “What do you have in mind?”  And Khrushchev says, “That’s easy!  Let’s make a deal.  We’ll merge our space programs and build an International Space Station together.”

Body: Kennedy’s reward for his accomplishment was a detour on his parade route.  That made it a piece of cake for crazies to assassinate the first president since Eisenhower who had the balls to show some common sense.

Me:    Yes, I remember Eisenhower’s warning to beware of the military industrial complex.  If you’re through having fun at my expense, will you please just allow me the dignity of a few hours sleep?  I have a wellness exam tomorrow and don’t want to fail he Alzheimer’s test.

Body:  I told you to call and cancel that before you left work today.

Me:     News flash!  I can’t talk!  Doctor’s offices don’t like it when the only thing they hear at the other end of the phone is heavy breathing.

Body:   You didn’t listen when I told you to send them a fax at work, when you had one available.  And what did I tell you about eating Muenster Cheese three hours before midnight?

Body:   Enjoy that grinding in your stomach and the foul aroma of limburger cheese that has been baking in the Arizona sun for a week as it assaults what’s left of your olfactory system.

Body:   As your mother used to say, “Don’t kill the messenger.”

So, there you have it…my body’s latest assault on my unsuspecting, and entirely too innocent, braincells.

Good night to all, and may the farce be with you.