February 27, 2019 by floridaborne
Other Brother Coon Cat (aka OBCC)  is middle-aged  — almost 9 years old.  This weekend he was going to the litter box at least once every half hour, most of the time nothing was in there to clean out, and the room didn’t smell like a sewer on a 100F day.
.
Not being forced to gasp for breath concerned me greatly.
. 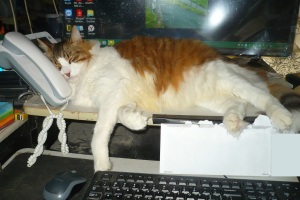 The day before his ordeal at the vet’s office.

.
On Sunday, he was so listless that all he wanted to do was sleep.  When he’s not actively trying to type on my keyboard or turn my hands into shredded meat, he has to be sick.
.
Worse yet, he wanted to sleep next to me all night.  That’s a sure sign he’s not feeling well.
.
I’d lost OBCC’s brother a few months ago.  Coon Cat’s symptoms were similar, shortly before trying to drink dishwater out of the sink when an entire kitty bowl of fresh water was a foot away.
.
Watching loved ones die is not on my “favorite activities” list (More likely it’s one notch above torture).  So, on Monday,  I called the vets office hoping they could squeeze him in.
.
My favorite vet happened to be there that day,  WooHoo!   And, although they were very busy, they had a 2pm opening. Serendipitous!  It meant I wouldn’t have to pay an emergency office visit fee.
.
Hey, we have to be thankful when 3 good things come together in universal harmony.  It’s a lot like being an Aztec sacrifice:  A year of royalty treatment while you await the moment you have the unmatched thrill of watching your heart beating outside your body.
.
I could hear OBCC protesting against having his blood drawn, getting an x-ray of his bowels to see if they were impacted, and enduring the procurement of a urine sample.  There is no better test of self-control than to refrain from wanting to save your fur-baby from torture by vet technician.
.
After what happened next, you can understand why I don’t want to be a vet tech.
It should be one of the steps a person has to take to obtain sainthood.
.
First diagnosis:   Bacteria in his urine showing that he was in the beginnings of a bladder infection.
Second :              He had a few fecal plugs and a lot of gas so the vet recommended an enema.
.
He had a shot of antibiotics to get rid of the infection.  Having a way to avoid trying to force a pill down a cat’s throat is worth 3 times the price.
.
If you think OBCC was loud for a blood test, his protestations over an enema proved once again that he could out-squeal an air raid siren.

He refused to let out a stink bomb of poop until he arrived home to his litter box — the one in my bedroom.  Want to bring a country to its knees? Fill a missile with that stuff and set it to explode over a city.

He’s more alert today (possibly on guard against an attack from the rear).  My hand is filled with scratches and I’m trying to type while fighting off the feet that insist on banging the keys at just the wrong time.
.

I told Hubby that I’d rather spend $366 on OBCC than to go out to eat at a nice restaurant once a month for the next year.
.
Hubby reminded me that, at present, he’d be the one doing the eating and I’d have to sit there watching him eat while I guzzle a food supplement.
.
Anyway, since I go out to eat about once every 2 months on average, and usually don’t spend over $10 when I do, that’s a rather lame comparison.
.
Still, the point remains:   I’d rather wake up next to a healthier cat yowling to be fed, than a sick cat purring next to me.
.
The vet’s office will call today with the results of his blood test.  I’m hoping that being full of c#@p was his only problem.
© Joelle LeGendre