Well, Mr. Exuberance is at the vet’s office getting neutered, and Eskimo Mutt received his exam.  Both are in great shape, considering they’d been at the animal shelter for a while.

Wish I could get a better picture of them, but once the flash goes off, they run outside or jump around.

Yesterday, I had jury duty, a very enlightening venture.  It proved this truth to me once again:  Dogs are better than most people. 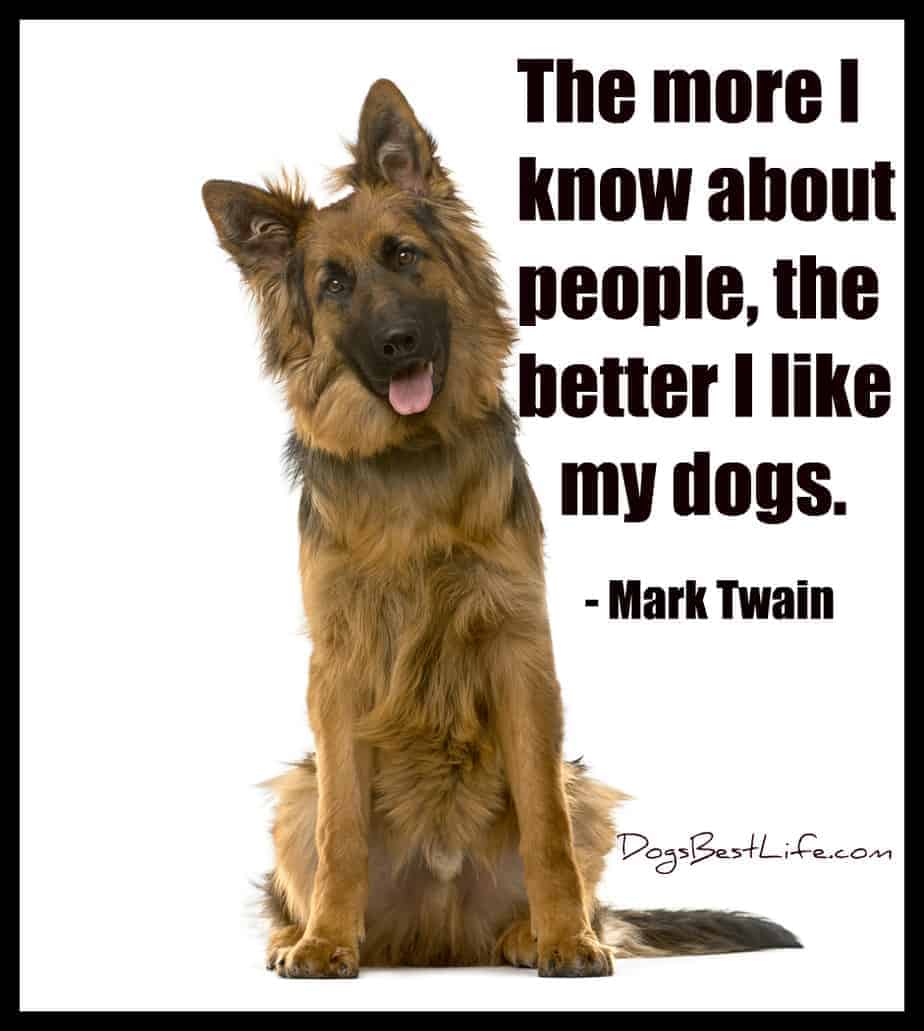 I’ve been in my comfort zone too long.  My family, people at work and every companion at home all make me feel (for lack of better words) “almost normal.”

I was at the courthouse for jury duty from 8:30 until until 9:45 a.m., where 100 potential jurors waited as if the casket was going to arrive any minute.  Worse than someone dying was the fact that it that felt like 32F in there.

Need to get out of jury duty?  They don’t let people call on the phone anymore to say, “I’m a dying pregnant felon with 15 kids at home,” or whatever the problem is.  No — you have to send a medical excuse to them.   And if you don’t,  you have to form a line to talk with the judge privately.

.I don’t know how you feel about it, but I felt like one of the attractions at a side-show.
.
Standing in line like a 6-year-old waiting to go to recess wasn’t my first humiliation.
.
When I entered the building, I was told to take off my dark glasses and hat.  I refused, showing my driver’s license (you can’t take a picture with dark glasses on unless you have a medical reason).  The officer (a woman) insisted.  Again, I said no.
.
Dear God!  I didn’t have this much trouble going through the TSA line!  I wondered if groping was going to be next.  As I searched for the letter from my optometrist in my purse to show her the note I’d used in the TSA line, I said I’d be glad to speak with her supervisor about it.
.
Yes, I was nice.
(for once)
.
She considered what I had to say (personally, I think someone told her in an earpiece that she was out of line — or possibly her supervisor was the man standing behind me and gave her some sort of signal) and then she told me it would suffice if I looked toward the camera, which I did:
.
Right up into the fluorescent lights.
.
Yes, it gave me a headache that got progressively worse, so I took an Excedrin migraine pill hoping I wasn’t going to regret leaving my prescription migraine meds at home.
. 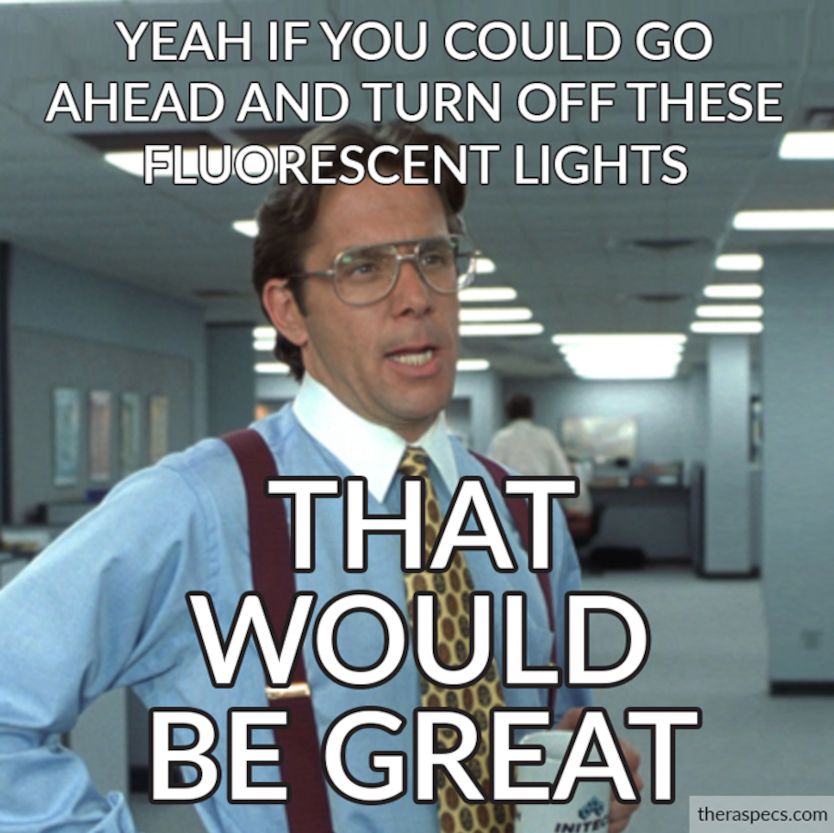 As I mentioned earlier, the courtroom was FREEZING (glad I had a sweater with me).  Stress makes the tics worse, and apparently I was the entertainment portion of this funeral for a few prospective jurors.  There were 3 “women of color” sitting on the bench in front of me that kept looking back at me and laughing.  One pointed and laughed some more.  I wanted to tell them to stop, but they would have denied any wrong doing — and I would have looked more like a crazy person (than I already did) with a hat, dark glasses, face contortions, and hunched over while shivering my @$$ off.
.
When I got in line and finally talked with the judge, I told him that I wasn’t trying to get out of jury duty, I just knew from experience that I wasn’t going to be called.  I explained that the tics would be distracting in a courtroom, and the grimacing might be misinterpreted by lawyers or their clients.
.
I had been summoned for jury duty at least 10 times in Florida, and was never called to serve once.  The judge (who seemed to be a very kind and compassionate man), smiled and said he was willing to accommodate the disability, but he understood my point.  He gave me the choice to stay or go.  I chose to go, stating that I didn’t really want to stick around for more humiliation.
.

I didn’t know how greatly this experience would affect me.  I ended up crying my eyes out in the bathroom, and then I cried some more while I was at work.  When the 3 women kept looking back at me and laughing, I felt like I was back in elementary school.  I hope they get picked for grand jury duty, have a high-profile case that takes 6 months to finish and it inconveniences the hell out of them.
.
Better yet….
No, I’ll get to that later.
.
I know it was not the time or place pick that battle.  If I had been in a grocery store line, I would have asked,  “What the hell is your problem?”   If you wonder the same about me, that’s easy to answer:  I don’t like to be in a room with so many unhappy people dressed in pajamas, designer jeans that resemble rags, size 56 strapless stretch shirts and short shorts, or had just come from shoveling manure at a horse farm.  I didn’t point at any of THEM and laugh.
.
Jury duty is a high honor, one that I’ll never have the chance to participate in.  I chose to wear a dress, but there are some things a dress can’t hide; like Tourette’s.
.
Added to that minor foray into hell, I forgot my yoga pants and shirt so I couldn’t go to yoga on Monday.  It was like a Tsunami of little “bad stuff” building into a frenzy.  My mantra for the day?  “You’re not living in a third world country drinking brown water and watching your twenty children die of starvation.  Get over it!”

I’m not proud of my reaction to the situation, and especially disliked being mentally transported back to elementary school again, but it was quite an eye opener.

If only the migraine would let me open my eyes.

I have an island of stability surrounding me at home, at work, and when I’m with family (and that includes my 4-footed ones who don’t give a flying fandango what my flaws are).  Yesterday I had the opportunity to see just how fortunate I am to have so much love and protection.

I am thankful but….

Karma, dearest, I have a job for you. 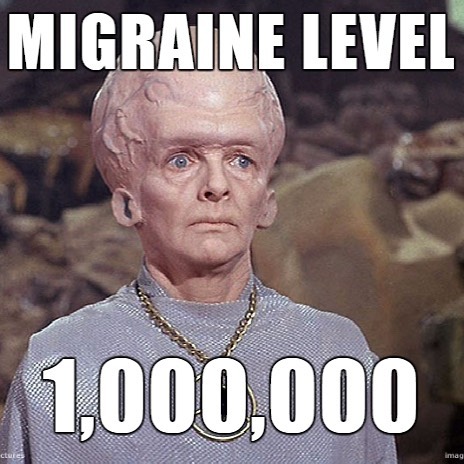 tranporting headache to humiliating humans in 3….2….