Tossing around trying to find comfort and I finally accept the truth.

A scene forms on my eyelids like an old-style movie projector.  I’m walking through the engine room of an alien ship, which is strange.  They vibrate so quickly it’s hard to perceive a form.  As if I’ve lived in a space-faring culture all of my life, I know the engines are no danger to me.

One of the attendants laughs at my naive thought and replies, radiation poisoning is a primitive concept.

The colors, light blue and beige, calm me as I walk to a window seat.  It’s not like the airlines, though…  The seat is any size, shape and incline you choose.  A view of the outside is like looking at the stars through a computer screen.  Instead of a pressurized cabin, you feel as if you’re there, then you’re not.

I’m circling Earth, a curiosity at best:  It’s like the cosmic version of Ripley’s Believe it or not.

At the edges of vision, darkness encroaches and a wall begins to form until the only thing left are my eyelids.

If that’s someone’s twisted idea of “alien abduction,” I’m not amused . I thought it was supposed to be frightening, or enlightening.

Guess the following really is true…

What’s next…a woman in love with a giant pet lizard?

Oh.  Now I remember.  I saw that on Facebook earlier today.  It’s 3 feet long, has a lizard collar and gets walked like a dog.  Maybe it’s an alien in disguise, here to study humans.

What can I do that’s so D@%*ed boring my mind won’t have any other choice BUT to sleep?

Hmmm…. I’ll look up information about leprosy.  Only 200 cases are reported in the USA each year.  Most people with it live in India.  It’s suspected that armadillos can transmit the disease.

My dream of having a pet armadillo accompany me on a trip to the Taj Mahal has now turned to dust.

These guys have no trouble finding their way to snoresville. 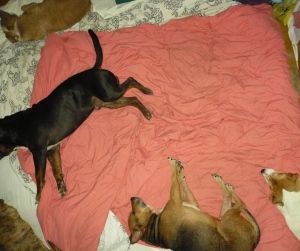 At least someone in this house can get some sleep.