RANT WARNING: OKAY! I HAVE TO SAY IT!

I am so D@%*#d tired of so-called equality in education! 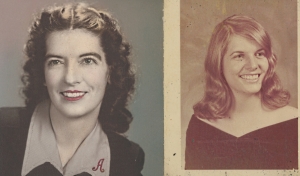 When my mother was 17, she graduated from high school.
.
She was in the minority.
.
In 1930, if you graduated from high school it was quite an accomplishment.  By the time she’d finished middle school, she had learned to read, write, and solve math problems.  In high school, she learned how to be a secretary, and that included shorthand.
.
My father had a 5th grade education, working as a piano mover for much of his early life. When he had a taxi business and a moving company, mom kept the books.  He entrusted every cent he made into her care.
.
My dad used to say she could take a nickel and squeeze it until it sh…..uh, screamed.
.
I once asked her, “Why do you want to stay home when you could go to work and make more than daddy?”
.
I don’t remember her exact reply, so here’s the synopsis: “I’m CEO of my home and your father is the Board of Directors.  I love what I do, and I don’t want an 8 to 5 job.”
.
It took years for me to understand that being a CEO isn’t all glamour; parts of the job greatly resemble cleaning a toilet.
.
When I was 17, I left high school with the ability to write a sentence and a talent for playing piano.  I understood the basics of math but my handwriting was terrible and my essays were sub-par.  I’d never read a book that I could remember and learned by listening to other people talk to me about what was in the books I’d struggled to read.
.
That worked well in high school — not so well in college.
.
After graduating from 12 years of hell, there was no word for dyslexia.   No help, either.
.
My sister, an English major, finished college in 3 years.  I was in college for two and dropped out with a D average.  She worked as a middle-school teacher for a year and was ever so happy to return for her master’s degree in linguistics.
.
After my failed attempt at college, I spent 3 months at home where mom guilted, prodded, and pulled me to a typewriter to polish my typing skills.  I moved to another state, close to my sister, and landed my first real job; a secretary at a university desperate for clerical help.
.
After three days, it was painfully evident I had no concept of what a secretary was supposed to do.  My saving grace?  There is something to be said for work ethic.
.
I had crashed my sister’s Vespa into a rock pile, fractured my wrist, and went back to work a week later.  During my 6-week recuperation, while typing with a cast up past my elbow, I studied how business letters were constructed and asked for the advice of the secretary who worked next to me.  By the time my cast was taken off, my abilities had greatly improved.  Fortunately, I didn’t know how close they had been to firing me the first week.
.
It helped that I worked for a professor of physical therapy who, after a year, stated, “I think you have minimal brain damage.”
.
That was the term for dyslexia in the 1970’s.
.
She used this “asset” to her full advantage, often asking me to take the tests that she was going to be giving her students.  If I could make a C on it, everyone in her class was capable of making an A.
. 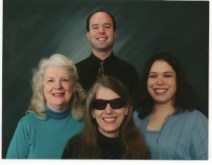 Over a span of several decades, the term morphed into “learning disability.”  My sister had her own business teaching effective business writing and grammar to large corporations.  During my late 20’s through my early 40’s, she helped me develop some skills I should have learned in high school; skills that take much longer to master for someone with dyslexia.
.
She was there for both my children, too.  My son was able to go to Spain as an exchange student, an experience that led him to where he is today; an author, poet, and full professor who provides a stellar education in Spanish and Portuguese studies.
.
When I moved to the area I live in now, my daughter attended a high school where her science teacher told her that plexi was a form of glass.  The next year, I used part of her college fund to send her to a private school.  The “education” she’d received in rural Florida was so horrendous, she had to make up two years of work in one.
.
That’s where my sister came to the rescue yet again.
.
My daughter moved to another state and finished her last year in top-rated high school. She eventually went to a local college and earned a B.A. while living with my sister the first few years, and earned a master’s degree in a city 2 hours away from her.
.
My children were fortunate.
.
Which brings me back to the topic of substandard education.
It’s not just in rural towns anymore, it’s a nationwide epidemic.
.
I dropped out of college the first time for a reason — I wasn’t prepared to learn.  No one, at that time, had thought to take my money, give me a substandard education, saddle me with a huge student loan, and send me out into the world to fail.
.
When I returned to college, I graduated at the age of 36 with a 3.3 grade average.
.
Then, I had to find a job matching my qualifications.  That is a story to be told some other time.   All I’ll say about it is that I moved to another state with a new husband shortly after graduation and found that a 4-year college degree is the equivalent of a high school diploma in California. If you’re wondering why tent cities are epidemic in California, that’s one clue.
.
After moving back to Florida,  I found a job serving people with developmental disabilities and have excelled in that field for the past 25 years.
.
It wasn’t easy, but I had both the tools and the support to succeed.
.
Fast forward to NOW.
.
I am HEARTSICK at the number of good, caring, kind people graduating from high school, and from college, who cannot write an intelligible sentence and who have no concept of how to add/subtract/multiply/divide.
.
It’s like a mass-induced dyslexia…
.
…and it is nothing short of criminal to send a young adult into the work world without the skills to succeed.
.
This problem requires a solution far more complex than changing the educational system from the ground up.
.
It requires people like my sister who are willing to take the time to mentor.
.
It requires that we demand excellence in education,
and abandon the concept of participation awards.
.
And for God’s sake, we have computers now. Use spell check!
.
I’m sure you can come up with more solutions, and you are welcome to list them in the reply section on this blog.