I started this post in November 2017 and forgot about it.

November was NaNoWriMo and I was trying to write a novel.

I was behind at work, the busiest month of the year, and then there was that ridiculous novel roiling around in my head wanting to be written.  It kept asking myself… 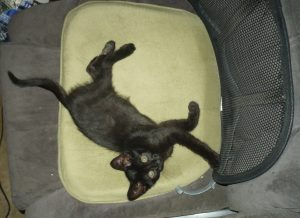 He showed up on our back step on Friday, October 13th, skinny, hungry, dirty, and this Tiny Terror took over the place.  If you must know, that’s my chair and he was hogging the cushion long before he turned into this:

Soon, his fur was sleek as silk and he was twice the size

With twice the attitude of these two put together:

BACK TO MY NOTES FROM November 2017 NaNoWriMo:

Now that he has a perpetural food bowl, a full stomach and several padded places to sleep, he has the energy level of a nuclear power plant.  He’s turned my fingers into handburger and thinks my arm is a chew toy.  He runs between dog legs like a feline Flash…and no place is sacred.   Try using the toilet when your toes are being attacked.

He insists he’s my cat.  All I do is feed him, pet him, and buy him toys.  What’s so special about that?  If I don’t feed him, he attacks whatever I’m trying to eat.  Last night, I sat in horror as he munched on my key lime pie.  If I don’t buy him toys, he attacks dog tails and anything not bolted down.

Most cats love to help you type.  This one pushes your buttons — in more ways than one.  There were pop-up screens I never knew existed, but the Tiny Terror found them.

Ever been 32 pages into your book to find a cat sleeping on your keyboard, 6 windows open, and 20 pages of your manuscript missing?  Fortunately, it’s easy to distract him with food.  That gave me time to close the pop-ups.  Then I had to put him on my lap and pet him so he wouldn’t attack the keyboard while I hit undo about 100 times.

How do I avoid this happening again?  Simple.  I hit that little line next to the square which is next to the x on the upper right hand side of the screen and he can dance as much as he wants when the desktop is showing.

That, and I never let him out of my sight when I’m using the computer.  At this moment, he’s sleeping next to the mangled Kleenex box.

…no, my story isn’t about cats.

And if my characters won’t talk to me, there are always  7 dogs and 3 cats who love being talked at.

Now it’s time to get back to writing a novel.  I’m about to kill off a few minor characters.  If the Tiny Terror doesn’t kill me first.

NOW FOR A RETURN TO THE PRESENT

I see the Tiny Terror twice a day…when I’m opening cans of cat food.  He comes in and meows at me like a master barking orders.  If he had a whip, I’d probably have scars all over my body.

He’ll allow me to hold him and pet him — for a few minutes.  But then he’s outside right after eating.

Why can’t I have both the cat who once loved to sleep on my lap, and one who doesn’t think fingers are a chew toy? 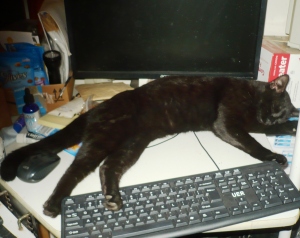 During the rare moments he actually sleeps on my desk, he still manages to find all the functions on my computer that I never knew existed.

I wonder how he does it?

No matter…he may rule over this household, but there are certain aspects of his life I still control.  He’s in for a rather unpleasant surprise next month: Neutering.