Yesterday, I made a mistake at work.  Not just any mistake…noooo.  It was one of those, “You should’ve known better” mistakes that makes you wonder if most of your brain cells have died.

Writing is what I do to get out the frustration.

So then, what am I writing for NaNoWriMo (which is short for, “if I don’t die from this I can endure anything” month)?

Here is my lame “book cover.” 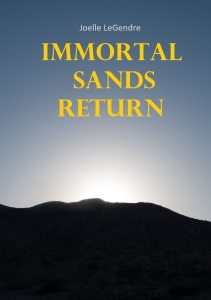 I took that picture near my sister’s home in Desert Hot Springs.

On the NaNoWriMo page is the synopsis and an excerpt.  I’ll save you the trouble of looking it up.  If you want to look it up and be a writing buddy, that would make my day.  🙂

And YES…it is the sequel to “Immortal Sands,” my first NaNoWriMo book and the next one I plan on getting edited and published.

which was supposed to be published 2 years ago but I seem to be bad luck for editors.

Given my latest mistake at work, I might want to get them published as quickly as possible.

What happens when the civilization you were elected to lead 50,000 years ago is dead and the remnants of it hate immortals?

The immortal sands return to save Earth.

But first they have to conquer it.

“We’ve removed all of the sand from Ben Brice’s containment unit, Colonel,” A handsome young man with dark hair whispered into his headset.  “It’s ready for transport to utopia.”

“Southern Nevada, a great place to dump the dregs,” his commander replied.  “We have barrels of the stuff, but the brain gang ordered this as a just-in-case.”

“Why would they spend years searching the deserts of six continents first and mine this stuff last?”

The oldest son of Louis Downing wore jeans and a cotton shirt, the logo on the side of his truck that of a local salvage company.  To anyone watching him enter and exit a place that still attracted thrill-seekers, he appeared to be part of a team doing a mundane job just like any other working-class grunt.

He’d descended from a long line of Downing’s, a family who believed they were part alien until the advent of genetic testing. His great great-grandfather, Paul II, grandfather, Paul III, and his father, Arthur were helping the alien build a space ship during most of the 20th century.  But his grandfather married a woman so stupid that Louis Downing II and his siblings held jobs that made their ancestor cringe;  Waiter, beautician, butcher, and hotel clerk.  The oldest son, he was told by military personnel that he was smarter than his siblings, with an IQ of 128.  He had a knack for numbers, majored in mathematics, and he was the only one to make it through college.  Were he able to tell his father that he was part of an elite force dedicated to eliminating the alien who started his family line, his father would be so proud.

He presently commanded a Sergeant and a corporal, an experienced excavation team using state-of-the art equipment.  Not a single grain of sand remained inside a titanium vault in a suburban back yard…a vault protected by a titanium cover.  That must’ve cost the alien a fortune. But his family’s founder left the Downing’s with millions, having given billions to another species the government wanted to eradicate…the Massi.

“Electric cycles coming your way,” the sergeant driving the flat bed truck carrying away their equipment advised him.  “Just rounding the entrance and approaching your position.”

Until November has become dust in the cosmic memory banks, I’m going to be rather distracted.  My first priority is WORK.  My second is NaNoWriMo.  Everything else comes last.

Except for eating.  I have too much dark chocolate stashed in the fridge to die from starvation this month.

9 thoughts on “Knee Deep in #NaNoWriMo”