I gave 6 dogs a bath yesterday.  I should give yoga-while-dog-washing classes.  I sit on the edge of the tub with one leg outstretched so the poor over-loved dog can’t escape.  He tries to duck under my leg.  I wrap an arm around his back and start washing the legs on the other side of his body.  It looks something like this…

…except the arm isn’t up in the air, it’s over a dog, and the leg is stuck out straight.  Okay!  I couldn’t find the exact pose.  That’s why it’s called yoga-while-dog-washing.

This is what a put-upon 68 pound dog with 1st world problems looks like.

Oh the horror of it all! To be immersed in water and forced to watch half a yard worth of hard-earned dirt go down the drain.

To make matters worse, cats don’t get baths,  they do that to themselves.  Dogs watched in horror as Coon Cat sidled over to a *shudder* wet towel and proceeded to do this: 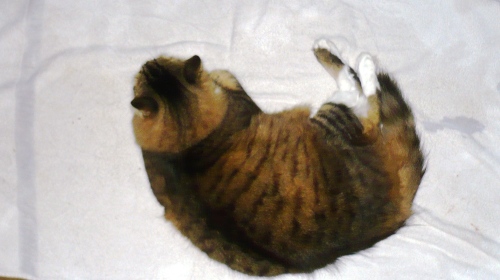 He embraced the very thing my dogs abhor.  He also has an inch thick layer of hair and can sit in the rain without getting his skin wet. A bath?  That’s another story.  But it’s so much fun to taunt the dogs in their misery.

Yes, my dogs have that “life is so unfair” look.  Sort of like this dog — who doesn’t belong to me because none of mine are under 40 pounds:

I have a Rottie Mutt who looks a lot like this and is just about as smart:

I tried doing this to get a dog into the tub.  I can tell you from experience that a 1st world dog close to brain death won’t fall for it more than once.

If dogs could talk, they’d probably tell you this

There are 2 reasons I don’t give a cat a bath.

I have been on the wrong end of both and lived to bandage it.