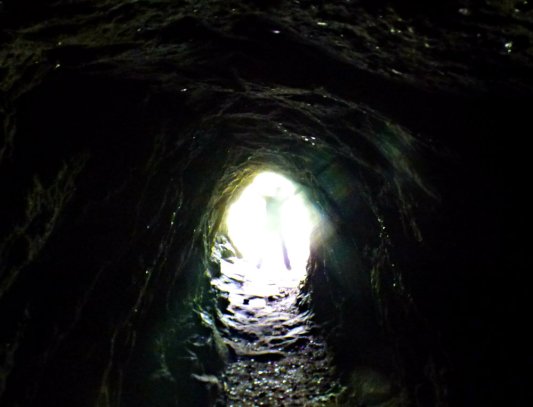 The year was 1972. I stood at the edge of a tunnel and peered into the darkness.  It wasn’t the first time and, given the fact I was standing here again, it might not be the last.

“This is so cool!”Arlene said.

“I forgot something in the car,” I muttered, walking away.

The footsteps behind me said that she wasn’t going to take no for an answer. “But you’ve just GOT to see…”

“A…drop?” she stuttered out as if she didn’t know.

Irritated at the glitch in her plans she demanded, “When have you ever been in a tunnel?”

“The birth canal is a tunnel.  It was almost as bad going through that as it was the three times I hit the bottom of that shaft.  There are more than a few bodies down there already.”

“Worse than landing on slime and bones, I never got to lose my virginity!”

“I…I don’t understand.  My boyfriend said that you and he….”

“I told that nut job I’d rather date a badger than go out with him, and I don’t do stuff like that to my friends!”

“God sent you back to keep me from doing something stupid?”

“Here’s what I know.  I’ve fallen down that shaft three times,  The next thing I remembered was squeezing through a birth canal.  The first time I died, I was 16.  The next 2 times I died, I made it to 17,  and this time I managed to celebrate my 18th birthday.  As I was plummeting down the shaft the first time, I screamed out the word ‘why’.  I still don’t know the answer.  Tell me Arlene, why do you want to kill me so badly?”

“My boyfriend is already down there.  I thought…”

“That scum-ball is where he belongs,” I frowned.  “Friends are the people you can count on to help you bury the bodies.  Why couldn’t you see that I’d never disrespect you?”

“Never kill me again,” I giggled at her.

“That’s a strange response.  Are we good here?”

“I’m alive, we’re still friends, I couldn’t ask for better than that.”

We walked toward her car, acting as if nothing unusual had happened. I didn’t tell her that the second and third time, she had to drug me to throw me over the edge.   This time I’d insisted on going to summer camp, but that had only postponed the inevitable.

Our parents were next-door neighbors years before our birth, and they’ve been best friends for decades.  In another week I’ll be flying to a college in California.  Arlene has to attend a junior college closer to home.

After the first time I died, I didn’t know why. The third time, under the same set of circumstances as the second time, the catalyst for Arlene’s murderous intentions became clear. When Arlene tried to kill me this time, no one else knew of my pregnancy except for the father.  Yep. He deserved to die.

“Mind if I visit you during spring break?”  she asked.

Did she plan a trip 9 months from now to see if I was lying?   If so, she’d be a month too late and ‘junior’ would be in the loving care of adoptive parents.

“Your break is a week before mine,”  I replied.  “How about spending next summer together instead?”

“Have you considered going into the military?”  I asked.  “You’re great at sports and you’ll make a hell of a master sergeant some day.”

With any luck, she’ll end up in South Vietnam for the next 4 years.

The For Sale sign in front of our house had “SOLD” plastered across the top, and my parents planned to retire to a desert resort 100 miles away from my destination…a school for dramatic arts.

There are some achievements one does not put on a resume.