February Writers of the #TMAT120 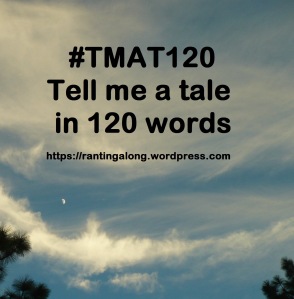 Five very brave people wrote about their worst nightmare, and I’m telling you now that it was hard to sleep after reading these!

I’m driving my car down a steep road between two sides that begin to narrow in on me the further down I get. To make it worse there are huge rocks to negotiate as well as the narrowing of the road. I can see an opening at the end but as I get closer my car is jammed in between the two steep sides. I am so jammed there is no way forward nor back. The only way out is through the back window. My only recourse is to find my way back to the top and start again in a different direction.

This dream occurred a few weeks before my relationship came to a thankful end.

The devil is at the gate and he’s laughing.

He laughs at my fear.

He sneers at my futile resistance.

He gestures down the road to where a long snaking line of people disappears over the horizon.

And then I run.

In unfamiliar surroundings, its presence lures me down into the dark well.
The stone steps disappear into shadow, my footfalls silent as I descend.
Light quickly fades, the air is stifling, fetid, poisoned and thick.
Sweat pours from my body saturating my clothes in fear.
My hair sticks to my scalp and the back of my neck.
But I cannot resist, and continue down into the Belly of Hell.
A voice calls from the depths.
I feel hands reaching out from the walls.
Holding me, trapping me, keeping me from running.
I feel the terror choking me and let forth a pleading wail for mercy.
It is my screams that awaken me.

When I had this dream, it frightened the life out of Hubby as he tried to comfort and reassure me. I awoke shaking like a leaf, everything still vivid. We talked about it, having no idea what may have triggered it. I haven’t had it, or anything similar, since.

Pauline was looking forward to her holiday to Istanbul with her friend Janina. While they were packing their bags, Janina suggested they mix their stuff and bags in case some bags were lost or delayed, they’ve got at least some clothes from the other bag. Pauline agreed and packed their stuff.

At Istanbul airport, Pauline was surprised when the Customs asked her to open her suitcase. They checked it and took out Janina’s jewellery box. They asked her a lot of questions and she said it wasn’t hers, it’s her friend’s. They found some drugs hidden in it. By that time, Janina was nowhere to be found. And Pauline was arrested for a crime she didn’t commit. Such a nightmare!

I tried to scream, fear had closed my throat. My mouth stretched in horror. I could feel it’s breath like a furnace licking at my eyes. I was caught. Something had gripped me tight. I couldn’t get free. Help me, please! I don’t want to die! I tried to force air into my starving lungs. It hurt so much. The tears sliding out of my eyes dried almost immediately. I couldn’t even cry. No. No! I would fight! I will not submit! I dragged hot air into my lungs and with a burst of adrenalin I lunged forward! Freedom! I wrestled that pillow and the fearsome blankets that had held prisoner, to their defeat. I was free. I would sleep.

See you again on the first Thursday of next month when the topic will be….

8 thoughts on “February Writers of the #TMAT120”