Brambles of life and dreams

Well…I’ll be going out the door to Yoga sometime today.  If anyone thinks that’s a good time to rob the place, here are 4 reasons why they might want to reconsider: 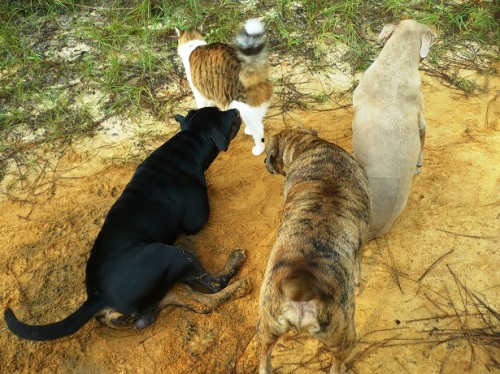 You might want to watch out for the 4-inch spiders, though.

Last night I had a dream (and no, it wasn’t about eating spiders).  It was one of those movie length things about (what else) the end of the world.  I was the only non-scientist in charge of herding the scientists egos long enough for them to work together.  Unfortunately, most of them wanted to kill the AI built to look as if she was born with Down Syndrome.  Why don’t scientists in movies ever think about the fact that an AI, with thousands of receptors that look like human hair,, is going to use these to listen in on what they’re saying?

So there I was, trying to comfort a robot and talk sense into a hundred egos.

It wasn’t pretty, but ended well.

All the scientists left for another planet in a space ship and the rest of us relied on the common sense of an AI to help redirect the solar flair that had killed Mars millions of years prior.

Hey!  That ending is better than the SciFi series where a tick was responsible for a spike in human evolution.

I have to wonder though — did the scientists in the space ship die from a disease brought on by their refusal to do mundane tasks like clean their own ship?

11 thoughts on “Brambles of life and dreams”