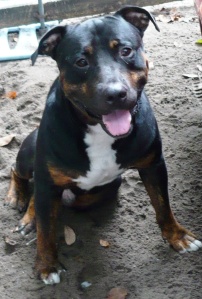 Here’s my day so far:

Up at 2 in the morning cleaning ample amounts of poop and pee in the laundry room, compliments of the creature we’re dog-sitting. Not the first time or the last time I’ll be cleaning up after a non-neutered male Rottie mutt that has the brain power of a worm.

If he weren’t so darned cute — most of the time — he would’ve been somewhere else a month after his “dad” left him with us to go on “vacation.”

I already have 5 dogs.  The last 2 were acquired from the man who just went on vacation 2 months ago.

The thought of that happening kept me up until 6 in the morning.

Awake again at 9:30am, when the too-dumb-to-exist creature that weighs 60 pounds decided to lick my forehead and then plop down on my head.  What did he do when I pushed at him to get off my face?  He thought I was petting him…proving once again that he only has enough brain power to keep from tripping over his own feet.

Unfortunately, he galumps over our feet instead.

I have the claw marks on the back of my feet to prove it.  I’ve lost one pair of 50 cent flip flops this year because he has to walk on them.  I can only fix the plastic anchors just so many times with bread wrapper thingy’s.  What other carnage is he going to wrack!

I don’t think he’s purposely destructive, like the dog we had a few years ago that ate half of our couch.  Since we don’t have a couch anymore, I can’t be sure.

Because of my rather abrupt awakening, this is not a day to do anything requiring thought.  So far, I’ve knocked over this when I was making my lunch:

It had about a cup of oil remaining in it when the lid broke.  That took a bunch of paper towels and dish soap to clean off the concrete floor. If there’s a rainbow at the end of this bizarre storm, I finally found something the Rottie mutt won’t eat.

Finally, I was able to settle down to the computer with half a sandwich.  I carefully positioned my  Jasmine tea, flavored with pieces of ginger and a tablespoon of honey, so that Other Brother Coon Cat couldn’t push it onto my keyboard.  But it’s hard to write a post when a cat is yowling in your ear. 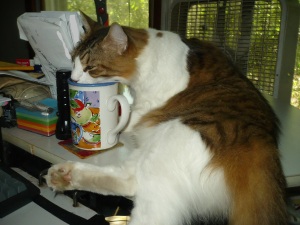 A picture paints a thousand curses.

I’d go back to sleep if 3 dogs weren’t already doing that on my bed.

← AND ON THE LIGHTER SIDE……..
RonovanWrites #Weekly #Haiku #Poetry Prompt #Challenge #109-Hope&Up →