Storming out the Write 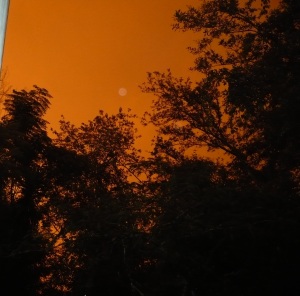 Very funny.  You know I’m always in your mind.

I love typing in the dark, where nothing hurts the mind’s eye.  Why am I having dreams about being in a storm?

You haven’t finished writing out the storm yet.  Type it out!

All right.  I was in this plane fighting the urge to upchuck.  The Bahamas  were, inexplicably located in the middle of the Gulf of Mexico.  The names of the islands were different, too.  Who names islands “equality,” “slavery” and…well…those are the only 2 names I remember.  I landed on Equality, the largest of the islands.  There, at the gate, a surly man sat with a stamp pad.

Get to the meat of it.  Forget the sauces.

Write out the dialogue between you.  It’s still haunting your thoughts.

“What caused the storm,”  I asked.

“The world is a tumultuous place,”  He replied.

“Who allowed oil to pour into the oceans.  Who created the atomic bomb?  Who starts the wars that rage on every continent?”  I asked.

“We’re attacked, and we retaliate.”

“The last I looked, vengeance, greed and retaliation were emotions,” I replied.  “While you relegated women to homes and mundane lives, men raped the Earth and repressed half of civilization by telling women we were inferior creatures without the capacity to lead.”

“Everyone knows the hand that rocks the cradle rules the world.”

“This is insanity,” I said with a bitter smirk.  “For centuries we’re relegated to powerlessness and yet at every turn you find a way to make it all our fault.”

“Women drive us to do what we do.  If women are as capable as you believe them to be, name one famous woman.”

“Why is it that the men who force women to cover from head to toe will kill a woman when she’s raped by a brother’s friend in her family home because somehow it’s her fault?  If men had the self-discipline to keep it in their pants,….”

“Women must not entice a man!”

“You’re kidding me…right?  You found a ridiculously twisted way to make your abysmal lack of self-control into our problem.  You turned your raging emotions into our fault.  If I remember correctly, lust is an emotion, too. “

“Just because you don’t want to hear it, doesn’t make it a lie. I’m not saying that women don’t have issues or that we’re not emotional.  I’m saying we have to find balance between the raging horror-moans and the passive acceptance of culturalization disguised as truth.

“In nature, it is the men who are dominant.”

“Tell that to the black widow spider, and any number of other creatures,” I said. “If a bear is stronger than a man, does that make the bear better?”

“Men were given dominion over the Earth!”

“And look how well that’s worked out. This storm has raged long enough!  The gulf between women and men has to be bridged or you’ll continue killing our world until every last human on earth becomes nothing more than an embarrassing moment in the herstory, or history, of the universe!”

Tell me, God, the universe or whatever you are.  Why can’t we break through this barrier? Why must we come to the pinnacle of our dreams just to find that we’re living in a nightmare of people who want to eradicate the past achievements and create their own version of truth?

Don’t you remember how the storm in your head started?

Over an argument about voting with someone who isn’t registered to vote.  I told her she had no right to talk about politics. Women died trying to wrest that right from men who insisted we were too emotional to go to the polls and cast our votes.  What does it take to have a voter registration card that says “independent.?”

No.  I’ll feel better when no woman in the world is forced to marry and have children when she’d rather devote her life elsewhere and no man in the world who wants to stay home and raise a family is denied the talents God gave them.  And I’ll be happy when the delusions that fuel our destruction are dissolved in a sea of truth and a balance is reached.

What if I told you none of this matters?  What if I said that living past the delusion is your goal, not trying to find a way to change it?

I’d say, “If every person in our past felt that way, I wouldn’t be typing on a computer asking whatever is inside me why the world is a roil of insanity wrapped in a layer of air.”

Go back to sleep.  Calm the storm.  Live this life and move on.  Leave the how of reaching balance to those with the ability to physically change the flow.  Your talent is to write about why it needs to be changed.