One Love at a Time

If this is your first time visiting my blog, and all the words are running together (that happens on G+ a lot) please visit WordPress to see my post as it was typed.  It will make more sense to you.  Possibly not much…but more. 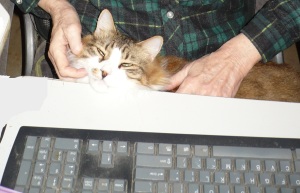 No keyboard is complete without a few cat hairs

Once again into absolute darkness my mind wanders endlessly.  This time I come bearing a 3am cat.

And I thought it was just that I’m in his chair.  This is where he sleeps at night since it’s been getting colder.

You don’t know why you’re here.

No one knows why we’re here.  We have male.  We have female.  If you made us in your image why did you break us in half?

If I didn’t know what you meant, I’d be laughing.

Seriously, whatever you are, we have religions treating women as if we have no leadership skills, no brains and no soul.  Men won’t allow women to do more than have children.  Good God! We have over 7 billion people.  The last thing we need is more children!

I can tell you have a lot to get out of your system.

Oh, this is just the foam roiling up on an ocean of questions, frustration and disdain.

At this moment, all I can see are the reasons why a sea of humanity is nothing short of the universal family disappointment.

You—all of humanity–chose to break in half what I made whole.  You chose to use that dichotomy to explore life.

The imbalance is killing us.  Half of the human race is misunderstood, maligned and enslaved.

Which half are you talking about?  The men who are told never to cry, the ones watching their wives go through childbirth wishing they could take away some of the pain, the gentle souls with delicate balls hanging from sensitive places who cannot, for a moment, show anyting less than confidence for fear of disappointing their families?

No.  The woman who are shoved into the stereotype of wife and mother, the women who should’ve been physicists but ended up having children they didn’t want, the women who are stuck in countries where they’re always being told they’re substandard emotional gossips.  The worst gossips I’ve ever met are men.  Try telling them they’re gossips and they say something derogatory like, “You’re just a stupid woman.”

Do you know why men don’t understand you?

Because they’re not women.

Why don’t you understand men?

Marriage is like talking to someone who thinks you’re a private in his 2 person army.

When a man has so much pain in his heart that he can’t, by the laws of his culture, express it,  how do you think it expresses itself.

Not in ways a woman wants to see.  This is a violent world where compassion, love, empathy and trust are about as useful as a target on your forehead.

He calls crying a woman’s weakness, but if he explodes into war, he calls it a just cause.

What does that mean?

It means that once male and female appreciate and understand the beauty inside each other, humanity  will be whole again.

I’m petting my cat right now.  The more I know about people, the more I respect my dogs and cats.

Why do you think your coon cat is rolling around your lap purring?

He’s trying to comfort me.  Or he’s trying to get me to vacate his bed.  At night he considers my chair his bed.

Do you love him any less for it?

No.  He’s a cat.  That’s the kind of things cats do.  I can’t dislike him for who he is, just appreciate his being.

I’m not as easy to forgive a man who beats a woman half his size and beats his children while telling them men own the world because they’re better.  If a man meets a grizzly in a Montana forest and he doesn’t have a weapon, does that make the bear any smarter than he is?  What kind of coward condones rape and calls it marriage?  That’s what it is when he gives his daughter away to some friend and doesn’t consider that she might want to be a doctor, nurse, professor!  What kind of man murders a woman’s soul and thinks God told him to do it?

Your species creates its own dogma, gravitates to its own religions.  I’ve told you before: You have free will and I can’t interfere. I can only guide.

What part of free will don’t you understand?

All of it.  Not that I want the opposite of free will, but why can’t there be something in between.  Why can’t a good and loving God intervene when the Hitler’s, Stalin’s and Religious extremists get out of hand?  Oh, and I can’t forget the political extremists either.  Between the gun control in the US and the uncontrol of ISIS we’re setting ourselves up to repeat history again.

You think that history rewards the ruthless tyrant.  But remember, there are still Buddhists among you and their way of life is quickly becoming widespread.

Sure…until extremists running the gamut–from atheists who want to kill all those who believe in God to religious fruitcakes who want to kill everyone who doesn’t–go pouring into other countries, purging peaceful people and spreading their brand of “truth.”

In 50 years, is it really going to matter?

Not to me.  I’ll be dead.  But it’s going to matter to my grandchildren.

And when the world is a lifeless rock circling a dead sun, will it matter?

Yes.   While we live it, life matters.  And if we’re not thinking about how life is going to be for our progeny 10 generations in the future, we’re a bunch of selfish bastards who need to die off and give dogs a chance to become the dominant species.

Yes.  It feels good to get this off my chest.

Do you feel how relaxed your kitty has become?

His paw is on my heart.  Awwww, he’s purring so beautiful.  How cute!

That’s how the world becomes civilized, one love at a time. Go back to bed, while your mind is at rest.

After I finish petting a kitty.