While I sit here looking out the window as I devour my cheese grits (non-greasy variety), a southern USA delicacy, I contemplate the bamboo vine (smilax).  It’s growing through a space between the bottom half of the window raised up 1 1/2 feet to accommodate an Air Conditioner I don’t want or need.

I’d ask my husband to take the-thing-that-makes-me-cold out of the window, but the last time that happened my beloved Chelsaddog needed it during her remaining few months of life as she progressively lost her battle with cancer.

It’s easy to see how superstitions start.  Tis illogical, I know.  But the part of me that needs to rely on pattern recognition to make decisions when I’m in the forest/jungle worried about being eaten by a bear/leopard is telling me, “Don’t do it or the Gentle Giant is next!”

If that’s all it took to change the future, everyone would have an air conditioner they didn’t need sitting in a window that would be of better use letting in the fresh air.  Still, when it comes to my doggies, I don’t want to tempt   fate. 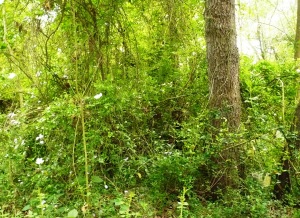 View of my back yard from a window that ISN’T covered in bamboo vine.

It means I have to brave the jungle I call a yard with lots of wild rose, blackberry brambles, and smilax thorns to circumvent.

There’s a method to my not-quite-rightness. If the dogs don’t bark a burglar away from the place, a multitude of thorns will get him before he can fight his way into the giant dog house. 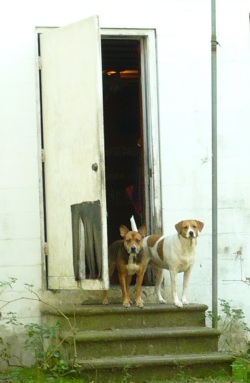 Believe me when I tell you that any criminal who finally makes it into the place will flop down on his knees, sobbing (as the dogs lick him to death). The only things worth a  d@%n in my kitchen are the corning ware plates & a set of green pots and pans.

And he’s welcome to as much rice protein as he cares to eat.

I have more important things to do than to decorate a house or plan a banquet–such as WRITE!

If a criminal  wants the printer from hell, he can have it (sans cat).  It’s still on the shelf while I contemplate whether or not it’s worth replacing the infuser.

Back to braving the jungle:

…like the fact that the bamboo vine is curled around the hurricane shutters like a snake slithering through the eyes of a skeleton.  Only skinnier. The scissors are going to have a workout today!

Thankfully, there’s a concrete block to step on so I can rip out the vines from the top as I cut my way down.

Thankfully, there’s a window to fall toward when I lose my balance

And thankfully, said window is stronger than it looks.

I don’t bother to curse my lack of planning until after I’m back on the ground.  That’s when I imagine what it’s like to be impaled by a 2-foot long window shard and consider how close I came to finding out.

(Not to worry, I have a prepaid funeral plan.  In a nutshell, I’ve instructed anyone who finds the body to cremate my @$$ and go have a beer).

I brush away a few small ticks trying to climb up my arm, clean the dog/cat/raccoon/leopard/bear/whatever poop off my 50 cent flip-flops and sit in my office enjoying the view. 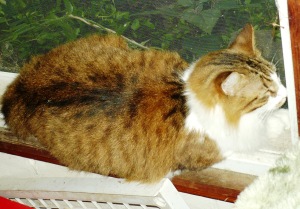 My idea of window decorations. They clean themselves.

Next month, maybe I’ll consider washing the windows. Until then, the cats can continue dusting them.

Personally, I’d rather write.  The dogs don’t care if I only vacuum once a…uh…month. 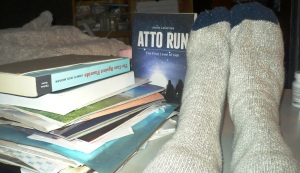 Next week, or maybe next month (possibly after I vacuum), I’m going to have a contest.  One lucky person will win a copy of my book (sans feet and clutter), but…

I must warn anyone who is allergic to dogs or cats: Consider the consequences if you enter this contest.  After all…

← Fun with poetry dogs
Of Birds, Dogs and Men →