ANCESTRY: The LeGendre’s of Arkansas (8) 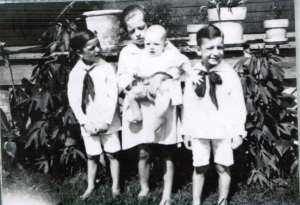 For new readers, these are my mothers notes. They’re retyped with all the errors and with her punctuation.  Her memoirs were the gift she left my sister and me in 1992. She passed away June 1993 from sun stroke.

For parts 1 through 7 please look under “memorabilia” https://rantingalong.wordpress.com/

As far as I know, Dad had no formal training in radios other than what he may have read in mechanical magazines or books.

Nevertheless, when radios were released to the public, after World War I, Dad had them on display in the office of the Peoples Electric Company, the first radios in the State of Arkansas.

At first, Dad had the radio – a large, highly polished, wooden box, about the size of a medium size upright refrigerator – moved from the office, and place in one corner of the large hall, which was used as a living room, in our house.

(The house was built in the shape of an “U”.  With two parallel sets of rooms – three rooms each — connected in front by a big hall.)

Dad moved the radio back to the office and arranged for one of the employees to remain at the office each night until the last “listener” had left.

Unfortunately the reception was very poor, most of the time.  In order to eliminate the problem, keep the listeners happy, and get standing orders for future sales of radios:

When the radio reception – in the office – became too bad, r faded out, one of the workers would “retire” to the shed.  Dad would start turning the deial and miraculous locate a new station, which was much clearer – and in reality from the shed in back of the office.

Herbert and Harold were each given a new tricycles to ride and enjoy; with instruction to never leave them in the driveway or around the old barn, back of the house.  Several months later, Harold made the mistake of leaving his tricycle in the drive-way.

Dad drove in late one dark rainy night; and as he made the semi-circle swing around a patch of weeds into the old barn (used as a garage) he ran into Harold’s tricycle – smashing it.

Dad was hot-headed, quick temper, and unpredictable.  We never knew when he was going to fly off of the handle and go into a rage, start hitting and trowing everything in sight, and fuming for weeks.  Sometimes we didn’t know why – and no one dared to ask.

Dad and Mother were both great at pouting.  They would sulk and not speak directly to each other for a month at a time, before deciding to makeup, and then everything was lovy-dovy.

This was the era when married women were considered 3’d class citizens and had no “rights”, other than those provided by their husband.

Occasionally, when running an errand, Mother would tell me to take a penny, of the change, and buy some candy.  I saw a sign in the bakery window, “Find a yellow center in your candy and win a baseball”.  I went in and bought a sack of the candy.

1921 Summer:   The Baptist Church, located across the street from the light office, was sponsoring a Baptist Church District Convention.  The local minister asked Dad, if he could help, by providing a room or meals for some of the visitors?  Mother agreed to provide the meals for four of the visiting ministers.

My most vivid memories of Liberty Street:  Every afternoon, during the summer, I had to stand in the sun and water the street.

An effort to limit the huge clouds of dust that rolled into the house every time a car or wagon traveled the street – plowing through the deep ruts of loose dirt — which was often.

(Air conditioners were unheard of.  Everyone had to keep all windows and doors open so the air could circulate throughout the house.)

Fall 1921:   I entered the second grade.  Mother entered Herbert in kindergarten and walked home.  After she left Herbert got down in the middle of the floor and started kicking, yelling, disrupting the whole school.

Mrs Gregory had taught the second grade, in the Marianna Grammar School, for 34 years prior to my entering her class.

Reading and spelling are still my problems today.

Our parents were both avid readers and realized that I had a reading problem.  They made arrangements with Mrs Gregory, second grade teacher, to tutor me in reading for an hour every Saturday morning at her home.

Each Saturday morning, for several months, I walked about a mile over to Mrs Gregory’s house where I was supposed to be tutor in reading and spelling.  In reality, I got very little, if any, private reading and spelling tutoring, for which my parent were paying her a dollar an hour.

Next:  The neighbors. discovering there is no Santa, and a bout with diphtheria.

6 thoughts on “ANCESTRY: The LeGendre’s of Arkansas (8)”