In honor of your upcoming birthday, I’m about to publish pictures of you when you were 2 and 3 years old.  I tried to weed out most of the embarrassing photos of you and your brother (the professor).

Grandmommy and Granddaddy are in an Illinois campground on their way to see their grandchildren:

The all-steel frame on their Mobilux motor home was rare at the time.  Still, when you have to dispose of the waste, it all smells the same whether you’re in a winnebago or a veritable mansion.

As usual, grandmommy arrived flashing a camera and didn’t stop taking pictures until she left.  Unfortunately, the photo finishing techniques of that era didn’t hold up over time–and the picture below is one of the best of the lot:

Lest you forget what your backyard looked like in Wisconsin for the 2 month summer, here it is before I bought the swingset and put it together for you.  A.S. is in white, you’re running ahead of her in red, and your brother found a bug to play with.  I’m amazed he didn’t become an entomologist.

You’ve commandeered me for a piggy back ride…again.  One of your favorite things!  I wasn’t happy when grandmommy’s camera caught me by surprise.  There’s nothing like a migraine after a flash of light.

The mobilux traveled to California to see your Aunt Bobby, who is modeling the sweater that grandmommy made her.  You can see by her face just how much she really, really wanted it.  Someday, just for fun, ask Aunt Bobby if she knows where she put that sweater. 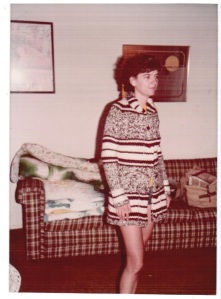 Next, your grandparents went home and tended the garden. Granddaddy, at the age of 70, shows off his sweet potatoes.

It’s bathtime (for no particular reason)! 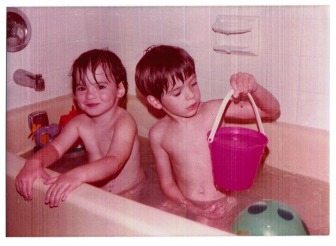 The professor is pretending to be a Jedi knight.  You are being…well…Lydia.

First, a little playtime with dad …

…and a granddaddy who was 2 months away from turning 71. (You were in the 1/2 basement/recreational area of our tri-level home. the bed is for guests or when there was a tornado warning). 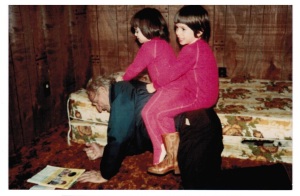 Then there’s the cake staring contest.

Followed by sharing the cake (not as much fun as staring at it). 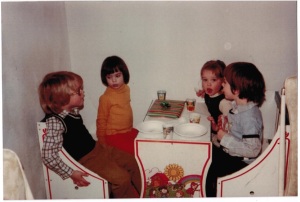 And lest you forget what Wisconsin was like in February,

or that you once had the highest slide in the neighborhood….

you might want to remember how much granddaddy hated driving in snow.  He arrived at the doorstep complaining about losing control of their 25 foot motor home, sliding down the ramp to the expressway and being damned lucky there wasn’t any traffic.  Grandmommy wasn’t listening.  She was too busy taking pictures of you and your brother.